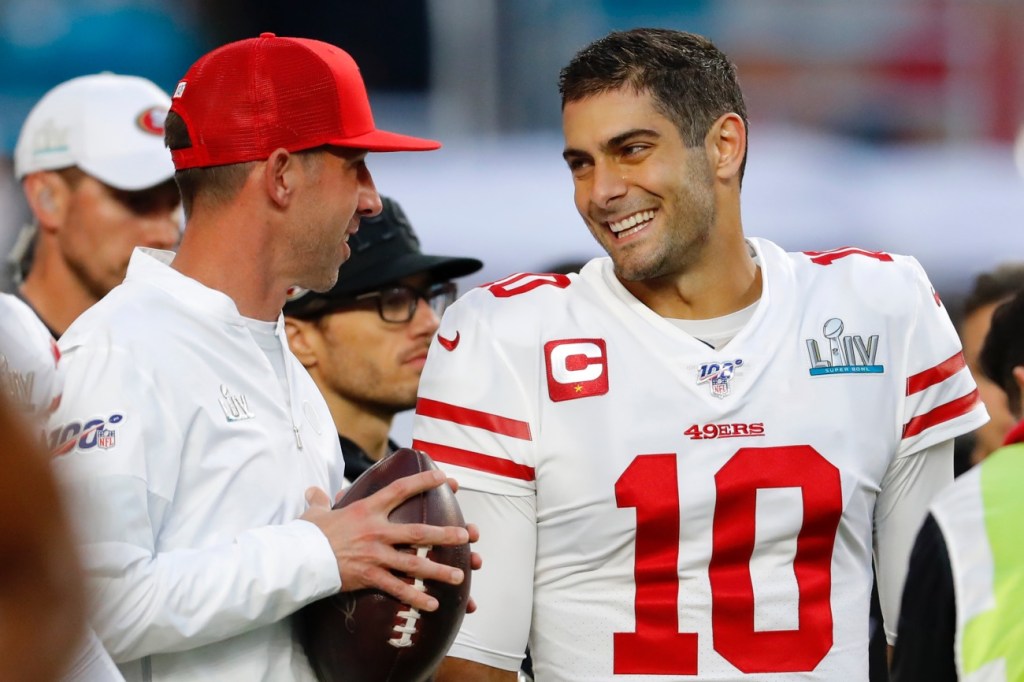 Former 2014 NFL Draft 2nd Round pick and Tom Brady backup, Jimmy Garoppolo, has been with the San Francisco 49ers since the 2017 NFL season. And he’s made a FORTUNE in the Bay Area.

During his four-ish season as Tom Brady’s backup with the New England Patriots, Jimmy Garoppolo made a cumulative $3,074,479 which included an $853,744 signing bonus and $125K workout bonus. And in his 4.5ish season with the San Francisco 49ers, Jimmy Garoppolo has earned a whopping $111,090,028. The Niners also owe Jimmy $24,200,000 for the 2022 season, the final year of his contract with SF that could likely wind up getting paid out by another team after a trade.

Alas, based on recent comments by 49ers head coach Kyle Shanahan it sounds like Jimmy Garoppolo’s playing days in the Bay Area are over. Michael David Smith of PFT picked up Shanahan’s comments about Garoppolo on Tim Kawakami’s podcast and there’s definitely a tone of finality here.

Kyle Shanahan: “We had an awesome run with Jimmy. It was great. But when you have a salary cap… This is a decision we made last year. And Jimmy gave Trey the year we thought he needed.”

Shanahan added that he is expecting to see Jimmy Garoppolo at training camp but does not expect to see him practicing. He was asked if Jimmy will start training with the team if he isn’t traded and Shanahan said “I think anything’s possible but that would surprise me right now.”

So much drama, yet — wouldn’t you know it — 49ers’ QB plan has gone exactly as Shanahan has said:

“We had an awesome run with Jimmy. It was great. But when you have a salary cap… This is a decision we made last year. And Jimmy gave Trey the year we thought he needed.”

What’s next for Jimmy Grapes?

I’ve seen a lot of this sentiment shared from 49ers fans:

No it didn’t. Having Garoppolo on the roster did not prevent the 49ers from doing anything this offseason. This is a false notion rooted in zero evidence https://t.co/JZCNj7wfmO

The NFL insider here says Jimmy Garoppolo’s situation didn’t limit the 49ers from doing anything in the offseason, which could be entirely true. If the Niners had targets they wanted to acquire they could’ve worked more proactively to trade Jimmy G but there’s no evidence they had any targets in mind they weren’t able to get.

I’m sure you’ll all aware but the 49ers have chosen to go with quarterback Trey Lance over Jimmy Garoppolo. Trey signed a 4-year contract worth $34,105,275 which included a $22.1M signing bonus.

He’s entering the second year of that contract and the 49ers have a projected win total of 9.5 this season.

They’re in the mix with Trey, as they were with Jimmy, but Garoppolo was never able to get them over that hump and it’s since seemed like his Super Bowl loss to Kansas City was the final stamp on his career…