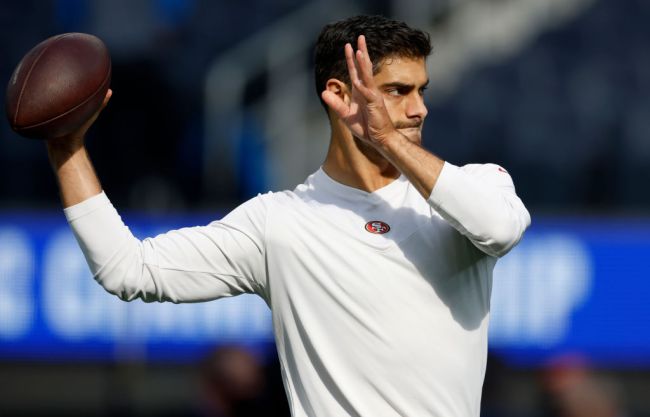 Jimmy Garoppolo has had a tough time finding a new home this offseason after the San Francisco 49ers made it clear that he would be replaced by Trey Lance as their starter. Even as teams begin reporting for training camp, there isn’t a clear favorite to trade for him.

With the Browns reportedly uninterested in trading for Garoppolo, it was expected that he would have a limited market, especially with it seeming very unlikely that the 49ers would trade him to the Seattle Seahawks.

Amid this expected lack of options, it seems a surprising trade candidate has emerged. According to Atlanta Falcons analyst Cam Marino, the Falcons have called the 49ers about Garoppolo.

Interesting update: The #Falcons are one of five known teams with a call in to the #49ers regarding QB Jimmy Garoppolo, a source confirms.

On the surface, it might seem a bit odd that the Atlanta Falcons would consider making a trade for Jimmy Garoppolo when they already signed Marcus Mariota this offseason and then drafted Desmond Ridder, but the reality is that they don’t actually have all that much money committed to the quarterback position right now.

Marcus Mariota will only make $4.25 million during the 2022 season. It isn’t exactly a figure that would deter them from making him their backup next season.

The bigger issue is whether or not Garoppolo actually makes the playoffs a possibility for them. With Mariota at QB, the Falcons are expected to be one of the NFL’s worst teams. Vegas currently has their win total set at over/under 4.5.

Garoppolo is certainly an upgrade over Mariota, but it’s difficult to see him making enough of an impact to do anything but earn the Falcons a worse draft pick in 2023.

Garoppolo will have to hope that doesn’t deter the Falcons as he may not have many other options for next season.