11-Year-Old 49ers Fan Ran Onto Field And ‘Scared The Hell’ Out Of Kyle Shanahan, Who Was Impressed 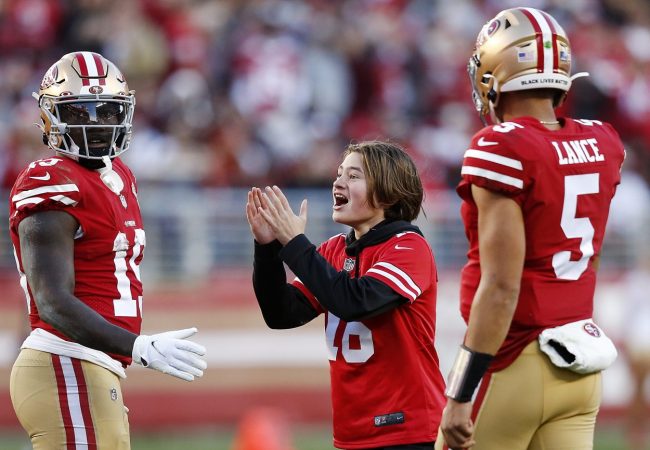 During the fourth quarter of Sunday’s game against the Texans, an 11-year-old 49ers fan somehow made his way onto the field and ran over to the San Francisco sideline. He proceeded to “scare the hell” out of head coach Kyle Shanahan.

Shanahan, who calls most of the offense for his team, had his head down in his play sheet. Suddenly, a young fan appeared right in front of him, said “holy cow, it’s Kyle Shanahan” and caught him completely off-guard.

In the video, the young fan comes from the far end of the stadium, running all of the way across the field of play during a stoppage. He goes completely untouched until he gets to the sideline, where security escorted him out.

Here is the sequence:

there's no way this kid just ran on the field to talk to kyle dude 💀 pic.twitter.com/w6Ek2EfvKv

After the game, Shanahan spoke about the moment. He had never seen a kid run on the field and gave the 11-year-old his respect for getting down there.

In a moment of complete shock, Shanahan said that he asked the kid how he got down onto the field but did not get the answer before he was taken off of the field.

If you want to scare the hell out of Kyle Shanahan – be an 11 year old kid and run up to him during the middle of a #49ers game. 😂 pic.twitter.com/AuFXSk7E7s

Tight end George Kittle also spoke about the moment and laughed it off. He said that it was super weird and that nobody really knew what was going on.

Per Kittle, the kid yelled “Deebo, I love you!” before running over to speak with Shanahan. He also said that he hoped the staff was nice to him, which is awesome.

George Kittle said the kid who rushed the field yelled 'I love you Deebo' before getting to Kyle Shanahan 😂 pic.twitter.com/2QiJ0g3WqX

How did the boy get loose? We may never know, but he took full advantage of his opportunity and nobody seemed to mind all too much. Especially considering that the 49ers won the game by 16.