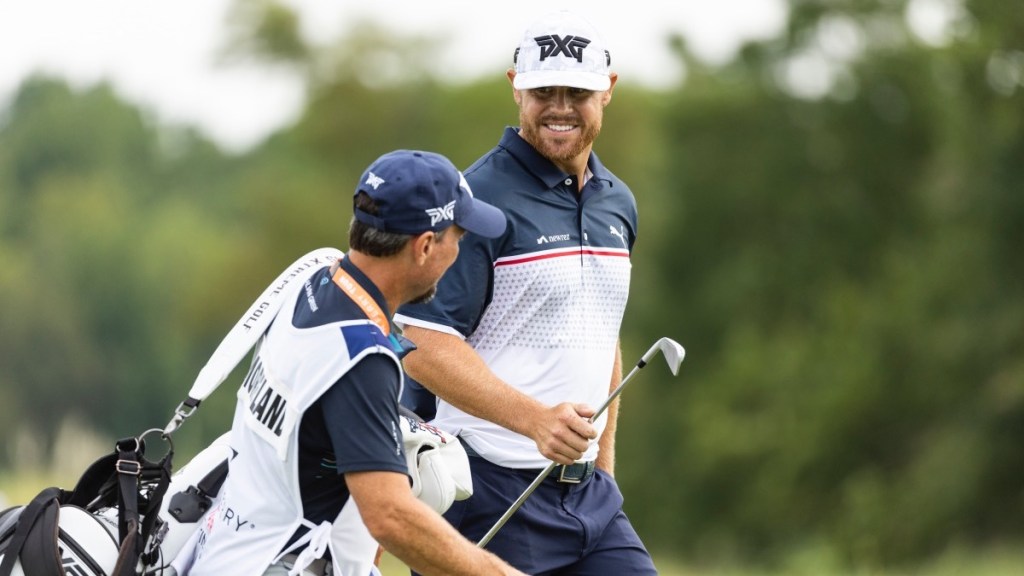 Kyle Westmoreland just became the first-ever US Air Force Academy graduate to earn his PGA Tour card. The 30-year-old previously served 5 years as a Captain in the United States Air Force after graduating from the Air Force Academy in Colorado.

He finished 25th in points which was good enough to secure the FINAL spot and earn his PGA Tour card, the first Air Force Academy graduate to do so. And there was a camera in the room at the exact moment he found out he’d achieved his dream of making the PGA Tour.

Kyle Westmoreland walked in the room and asked ‘Did Sam make a par?’ and the video producer informed him ‘you’re going to the PGA Tour.’ He asked ‘how do you know that’, unable to yet comprehend that his dream had come true.

Westmoreland’s next words are amazing. He says ‘I don’t drink, but I need a beer. You have a beer?’ Here is the video of Kyle Westmoreland finding out he’s now a full PGA Tour member.

He served for five years as a captain in the Air Force after graduation before returning to competitive golf. pic.twitter.com/3Jau6KvRCr

Just an incredible moment all around. And he’s a player that millions will be rooting for on the PGA Tour.

Getting his PGA Tour card was stressful but he kept his focus on the things that mattered: beating his rivals.

As Kyle Westmoreland was fighting to earn his PGA Tour card he kept a laser focus on the important things in life: sinking and beating his rivals. Kyle previously played collegiate golf for the USAF Academy and showed his Air Force pride during the tournament:

Here is another cool moment for Kyle:

"We start by saying thank you for your service. He served in the US Air Force, and is now headed to the PGA Tour for the 1st time after a T9 finish at the Nationwide Children's Hospital Championship. A 30 year old, from Daniel Island, SC, Kyle Westmoreland." pic.twitter.com/CagnxlpA8S

In 2022, Kyle Westmoreland recorded three Top 10 finishes on the Korn Ferry tour and earned $122,575. He previously became the first-ever Air Force Academy graduate to play in the U.S. Open, a chance he’ll get again.

Kyle’s best finishes on the Korn Ferry Tour this season were a tie for 9th at the Nationwide Children’s Hospital Championship, a 7th place finish at the Wichita Open Benefitting KU Wichita Pediatrics, and a T7th at the AdventHealth Championship.

It got really close for Kyle Westmoreland at the end.

Things were dicey for Kyle Westmoreland down the stretch. He finished tied for 52nd at the Korn Ferry Tour Championship (-6) after firing off scores of 69, 70, 71, and 72 for a total of 282.

Putting up higher scores each day seemed to briefly put his PGA Tour dream out of reach. But ultimately, it was good enough to earn the final spot on the PGA Tour.

You can find a full list of the 2022 Korn Ferry Tour graduates over on Wiki.