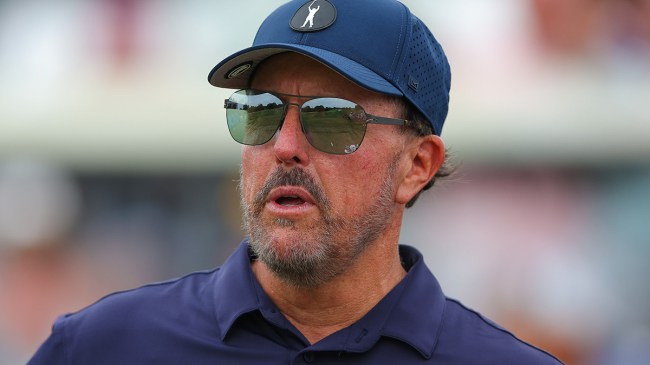 There’s arguably no one who’s spent more time enduring the hurricane of controversy that LIV Golf has managed to generate since the start of the year than Phil Mickelson, who understandably caught a ton of heat for his comments concerning the Saudis that fund the league before becoming the first domino to fall in the saga that’s continued to unfold over the course of 2022.

While almost every golfer who’s absconded to LIV has had to deal with varying degrees of backlash, Harold Varner III highlighted what I would argue is one of the biggest factors that’s resulted in players rubbing fans the wrong way when he candidly admitted the money he was offered served as his primary motivator when he announced he was making the leap earlier this week.

That admission was especially refreshing thanks to the number of pros who’ve either minimized (or outright denied) the role the financial upside played in their decision to take their talents to LIV. That includes Mickelson, who was reportedly offered a contract worth $200 million but insisted the real allure was “a once-in-a-lifetime opportunity to reshape how the PGA Tour operates.”

Despite the lofty nature of that statement, It has been hard to ignore the fairly immediate impact LIV Golf has had on the organization it’s attempting to go toe-to-toe with. Last month, Tiger Woods and Rory McIlroy announced their plans to team up with the PGA to launch “a tech-infused golf league” dubbed the TGL, which is part of a multi-pronged plan that will also harness increased purses in an attempt to keep current players happy.

Mickelson addressed those changes during a recent interview with Sports Illustrated where he shed some new light on how some of the golfers impacted by them have reacted behind the scenes, saying multiple people involved with the PGA Tour have reached out to thank him:

“It was stated very clearly that nothing was going to happen. Unless there was leverage, nothing was going to change. And all players should be appreciative of what LIV is doing. The players on LIV for the opportunity they are getting. And the PGA Tour for the leverage that was provided to get these changes done…

“Yes, numerous. And I’m very appreciative. They are from both sides. I think players on both sides of LIV and the PGA Tour are appreciative of what is happening. Every player is benefiting.’’

It’s almost like virtually everyone involved enjoys having more money as opposed to less money. Who knew?