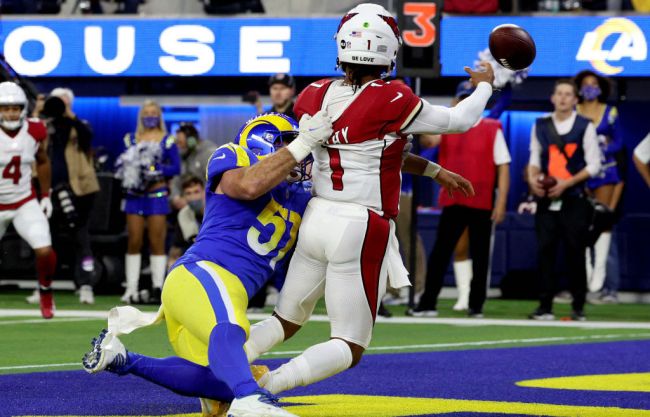 Super Wild Card Weekend wrapped up with the first-ever Monday Night Football playoff game last night, as the Arizona Cardinals went up to California to take on their NFC West rivals, the Los Angeles Rams. However, unfortunately for both casual fans and Arizona Cardinals fans, the game failed to live up to the hype, as the Rams absolutely beat the Cardinals down, ultimately winning the game by a score of 34-11.

During and following the game, much of the discussion was centered on Cardinals QB Kyler Murray, who looked like a shell of his usual explosive self. On the night, Murray — who was in the MVP discussion earlier in the season when the Cardinals had the best record in the National Football League — finished the game with an abysmal statline, as he completed 19 of 34 passed for 137 yards, no touchdowns, and two interceptions. Perhaps more surprisingly, he rushed for only six yards on two carries.

As a result of Murray’s poor performance, the young Cardinals signal-caller was the subject of seemingly endless memes:

Kyler Murray when the Cardinals defense gets a stop pic.twitter.com/7XHjEC2Mk4

Us after believing this was supposed to be Kyler Murray's best game of his career. pic.twitter.com/wOe5VI50nj

*Kyler Murray getting sacked in the end zone*

in kyler murray’s last drive he didn’t make it to midfield and threw a pick and his passer rating almost quadrupled pic.twitter.com/54HGYtOnm3

“What in the Carson Wentz was that?!”

Thanks to their dominant victory over the Arizona Cardinals, Matthew Stafford — fresh off of his first career playoff win — and the loaded Los Angeles Rams will head across the country to Florida to take on Tom Brady and the defending Super Bowl champion Tampa Bay Buccaneers. The Rams and the Bucs faced off back in week 3, with the Rams walking away with the 34-24 victory.

Elsewhere in the NFC, NFL MVP Aaron Rodgers and the top-seeded Green Bay Packers will host Jimmy Garoppolo and the San Francisco 49ers in the other Divisional Round matchup. This is another rematch from the regular season, as the Packers beat the Niners by a score of 30-28 back in Week 3.

Swinging over to the AFC, the top-seeded — and suspiciously slept on — Tennessee Titans will host Joe Burrow and the Cincinnati Bengals, while Josh Allen and the Buffalo Bills will head down to Kansas City to take on Patrick Mahomes and the two-time defending AFC champion Chiefs. The Bills put an absolute whooping on the Chiefs at Arrowhead Stadium earlier this season, beating them 38-20 in their own backyard.