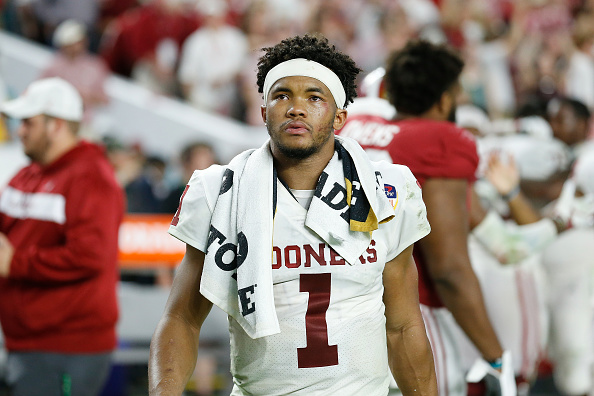 Oklahoma QB Kyler Murray is looking to get paid.

This weekend the Oakland As, who drafted Murray, sent their top executives to meet with Heisman winner in hopes of convincing him to play for them next season.

The Oakland Athletics are sending a group of top executives to meet with Heisman Trophy winner Kyler Murray on Sunday in the hopes of persuading him to pursue a professional baseball career as he decides between honoring his contract with the team or playing quarterback in the NFL, sources with knowledge of the meeting told ESPN.

According to NFL reporter Mike Leslie Murray told the As that he wanted $15 million from them to play baseball.

According to a source close to the situation, Kyler Murray’s number is $15M.

He wants big time money to stick with baseball, otherwise he will enter the NFL draft tomorrow.

The A’s are doing everything they can, sending their top brass, led by Billy Beane, to meet with him.

Many responses to this saying MLB rules wouldn’t allow for it.

However, now reports indicate MLB is prepared help the A’s keep Murray & find a loophole. Also reports that the league’s marketing arm is trying to help sweeten the pot.

If I were the A's, I'd tell him to go F-Himself! He'll be crawling back to them in 5 years anyway when he bombs out in the NFL

It’s a pretty shrewd move by Murray but it seems like he may eventually end up making more money in the pros considering he’s probably a better football player than he is a baseball player at this point.