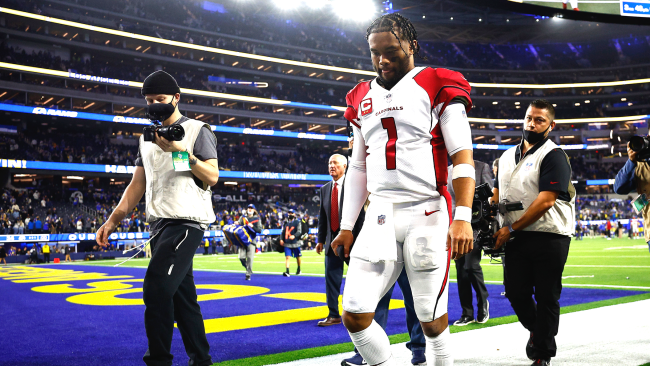 The NFL world was left more than a little confused when, after the Arizona’s 34-11 loss to the Los Angeles Rams in the playoffs, Kyler Murray scrubbed his Instagram and Twitter of all Cardinals pictures and unfollowed the team.

Murray, who completed 19 of 34 passed for 137 yards, no touchdowns, and two interceptions with six yards rushing in the defeat, didn’t offer any explanation for the move.

He also changed his Twitter profile photo to a split shot of himself wearing Oklahoma Sooners and Oakland A’s gear. Murray was the ninth overall selection of the Oakland Athletics in the 2018 MLB draft. He signed a contract with the A’s which included a $4.66 million signing bonus. Oakland still retains the rights to Murray should he decide to ever pursue professional baseball.

A few days after Murray erased all mention of the Cardinals on his social media accounts, Arizona copied Murray by wiping their Instagram account, leaving only two photos (as Murray had done), with both pics being that of the star QB.

Still, no one had any idea what was going on between the Cardinals and Murray, until Monday… sort of.

On Monday, Kyler Murray once again took to social media, this time to address the recent “nonsense.”

In his post, Murray appears to believe that he is being blamed for the Cardinals’ playoff failure.

“Anyone who has ever stepped between those lines with me knows how hard I go,” Murray said in his statement.

What is going on with Kyler Murray and the Cardinals?

Perhaps, however, it is something else that is causing such friction between Kyler Murray and the Cardinals. Something called leadership.

Chris Mortensen of ESPN reported on Sunday that “Murray is described as self-centered, immature and finger pointer, per sources. Murray is frustrated with franchise and was embarrassed by playoff loss to Rams and thinks he’s been framed as the scapegoat.”

Where’s it headed?
Despite the acrimony, the Cardinals expect things to calm down and Murray is their QB.
Select veterans hope to reach Murray on how he handle adversity better.
Coach Kliff Kingsbury also is self-scouting where he can provide better alternatives for QB.

That same day, Mike Garafolo of NFL Network also reported that Murray had shown immaturity during the Cardinals’ playoff loss when he refused to re-enter the game at the end.

“[The Cardinals] are looking for Murray to take a step forward in a number of areas,” Garafolo reported. “We’re talking about maturity, body language on the sideline, having a bigger voice with his teammates, and leadership.

“Case in point, the playoff game here, a minute left and the game had been decided, and backup Colt McCoy encouraged Murray to finish the game with his teammates. A banged-up Murray said no, that’s it, I’m done. so I know a lot of Cardinals folks were not happy with that one.”

Garafolo confirming that Murray took himself out of the Rams playoff game with about a minute left.

The Cardinals, apparently, did not like that decision. https://t.co/VlPby5Tz8u

In three seasons with the Arizona Cardinals, Kyler Murray has gone 22-23-1 as the starting quarterback with 70 touchdowns passing, 20 touchdowns rushing, with 34 interceptions and 27 fumbles (18 recovered by the opponent).

NFL fans had much to say about the allegations being reported about Murray’s lack of leadership and maturity.

He's not the 1st QB to have a horrible playoff debut. But REAL Cardinals fans will tell you, his bad body language shows every single time the game gets difficult. You can't have Kurt Warner AND Carson Palmer say this about U. He needs get tougher stop 😭..

I get the injury concerns, and in a regular season game you pull the starters. But Kyler and the rest of the team worked the entire season for that one playoff game, you simply don’t quit on it even if you aren’t coming back. And especially when your teammates ask you not to.

Murray is becoming a diva real quick. I don't care if he's more talented than any other QB the Cardinals have had. He's never going to win a Superbowl unless his attitude changes when things don't go his way.

“The cardinals, apparently, did not like that decision”. Nor should they have. Dude quits or pouts any time things don’t go his way.

All of you that are defending him are crazy. Name a HOF or top 10qb in this league that would ever pull themself out of a game. QB are the leader for the team and want to play every snap. The more that comes out the more discouraged I am for his future.

Looks like the honeymoon may be over in Arizona. Can the relationship be repaired? Stay tuned.