Kyrie Irving Admits He ‘Failed’ As Celtics Leader, Claims Depression From His Grandfather Dying Walled Him Off To His Teammates 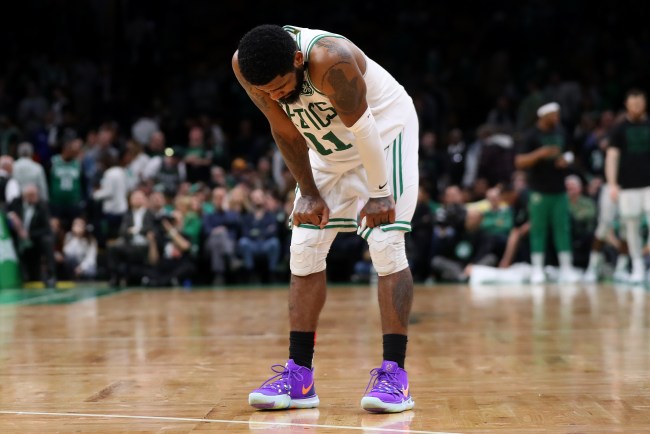 As a Celtics fan, I cannot tell you how many blood vessels I burst this year trying to be genuine in my support for Kyrie Irving. It was like being in a relationship with a super annoying girl with a really nice bum, you couldn’t help but constantly ask yourself if the commitment was worth it. It rarely ever is.

Following a wildly tumultuous season that ended with Milwaukee winning four straight games to eliminate the C’s, Kyrie didn’t offer fans any explanation for his blatant lack of leadership, with former and current Celtics claiming that the transcendently talented guard was “hard to play with” and “disrespectful to the city of Boston.”

Well, five months later, Celtics fans can finally put the Kyrie era to rest after the Brooklyn Net addressed his shortcomings during his short tenure in Boston.

Irving made his first appearance in front of the media on Friday at the Brooklyn Nets’ media day and admitted to failing as a leader.

“I didn’t give (his Celtics teammates) everything I could have,” Irving said. “Bringing everyone together, I failed.”

Kyrie added that the Celtics were a “surprise team” to trade for him and that the goals set for such a young team were wishful thinking.

“I think that some of the actual knowledge that needed to be had in terms of being a championship team takes more than just two years.”

The 27-year-old also attributed his obvious, season-long disenfranchisement with the passing of his grandfather

“The Boston crowd was immense. It was crazy. They loved me in Boston, I loved the Boston fans. And then two weeks later, things just got really, really rocky for me in terms of when I left, after the Phoenix game, I went to my grandfather’s memorial. He passed on Oct. 23, and after he passed, basketball was the last thing on my mind. So a lot of basketball and the joy I had for it was sucked away for me. There was a facial expression that I carried around with me throughout the year. I didn’t allow anybody to get close to me in that instance and it really bothered me. I didn’t take the necessary steps to get counseling or get therapy or anything to deal with someone that close to me dying. I never dealt with anything like that. For me, I responded in ways that are uncharacteristic. Like I said, I had to acknowledge that fact. I had to acknowledge that fact to the organization first.”

He also addressed his now infamous public vow to re-sign with the Celtics at an open practice in early October of last season, just two weeks before his grandfather passed.

“Nine months ago, I was sitting in front of the Boston crowd saying I wanted to re-sign,” Irving said. “After that, a lot of things happened in my personal life that really changed the landscape of how I felt about the game of basketball and actually playing it in a team environment. And that really affected me as a human being. I didn’t share it with anyone, I didn’t want to come out and say that this is bothering me or I’m in a depression at this point of dealing with the death of my grandfather, so when all this happened and the NBA and the pressures I put it in quotations from this basketball game came into free agency and what I was doing with my future, I wanted to dispel all those things, but I don’t think I did it the right way about being honest of how I feel.”

Kyrie will have his work cut out for him in Brooklyn this season. While the Nets don’t have the passionate and demanding fanbase the Celtics do, finding redemption on a less talented, Kevin Durant-less squad is no small feat.