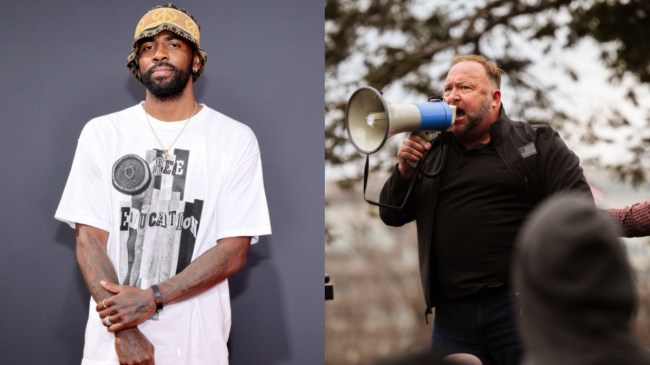 Kyrie Irving has resurfaced to make a fool out of himself once again, this time by sharing a video of Alex Jones, who has spent his summer in courtrooms with Sandy Hook parents who sued him for defamation over his coverage of the tragic shooting.

Irving, who shared the video on his Instagram, most recently popped up on Twitter last week to proclaim that “Ancestral Realm Energy is getting stronger and stronger.”

In the video, a much-younger Jones is talking about “New World Order tyranny” conspiracy theories and the video is captioned “Never forget – Alex Jones tried to warn us.”

Here is the video for source. This is only part of the Alex Jones rant. It’s also worth noting that Kyrie Irving is an anti-vaxxer, and he used his Platform to cast doubt on Covid Vaccines in the height of the Pandemic. The NBA should not tolerate this: pic.twitter.com/EVGG7TbKxB

Given the toxicity of Jones, Irving has swiftly been crushed on social media for using his platform to promote the disgraced conspiracy theorist:

no one:
kyrie irving:
pic.twitter.com/MWXK71hNSI

Kyrie has *been* delusional. He's a flat-earther, doesn't believe dinosaurs existed, thinks the Moon landing was a hoax, thinks Bob Marley's & Dr. King's deaths were linked assassinations…it's amazing the dude is a top-level performer and that unhinged.https://t.co/M2ctCPRrrn https://t.co/icWHytWmBB

Yes, the same Alex Jones who last month was ordered to pay $45 million in punitive damages to the parents of a 6-year-old boy killed in the 2012 Sandy Hook massacre – after Jones, a discredited conspiracy theorist, falsely claimed the shooting was a hoax.

Kyrie Irving just being that absolute piece of shit he's always been. https://t.co/AbcmodkYyc

Kyrie Irving is a bonafide nutjob. If I’m the owner of the Nets I get rid of his ass. Don’t care how gifted he is on a basketball court. This is beyond disgraceful. https://t.co/OpqXDxpGy2

As a result of his Sandy Hook lawsuits, Jones has been ordered by a job to pay out millions upon millions of dollars in damages (($49.3 million in total, according to PBS), which led to the parent company of InfoWars, Free Speech Systems, LLC, filing for bankruptcy back in July.

Given what Kyrie has been up to this summer — trying to force a trade out of New York, sharing Alex Jones conspiracy theories, etc. — it’s sure looking like it’s going to be another stressful, chaotic season for Brooklyn Nets fans.