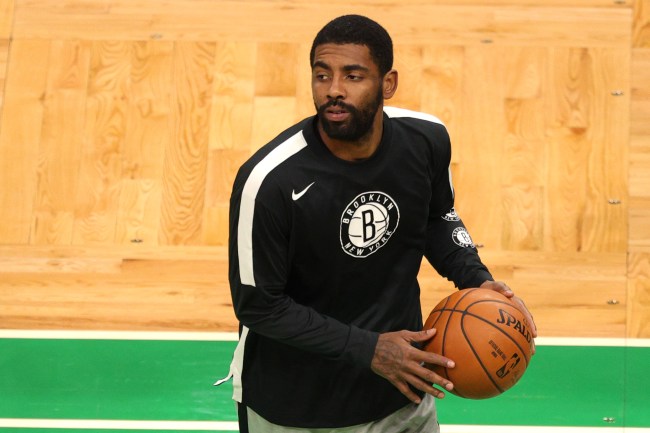 The Kyrie Irving saga in Brooklyn is starting to get ugly.

For the past week, Irving has decided to randomly sit out games without any explanation to media and very limited communication with the team.

The Brooklyn Nets are reportedly losing their patience with Irving after a video showed him potentially breaking Covid-19 protocol after attending a birthday party this weekend.

On Tuesday the team was forced to release a statement on Kyrie’s maskless birthday party video.

“We are aware of a video on social media featuring Kyrie Irving at a family gathering. We are reviewing the circumstances with both Kyrie and the NBA in order to determine compliance with health and safety protocols. Kyrie remains away from the team due to personal reasons. A date of his return has yet to be finalized. In the meantime, we will continue to stay focused on our organizational goals.

“Kyrie will have the opportunity to address his absence when he is ready to do so.”

According to Anthony Puccio of The Association, the Nets organization has made it clear that they’re unhappy with Irving’s lack of communication during his hiatus.

The Nets have a losing record and Kyrie Irving is out dancing in the club, set to be sit out for a 4th straight game tonight.

The team's patience with the star point guard is growing thin and they have made that clear with him.https://t.co/vjdHj9Hhdt

Three weeks into the season, Irving has created quite the frenzy around Brooklyn. He refused to speak with reporters during media week. He didn’t inform Nets head coach Steve Nash that he would miss Thursday’s game against the Philadelphia 76ers until moments before tip-off. He’s maskless in the viral club video, which is likely to result in him missing more games due to NBA health and safety protocols. The big question inside the Nets: How much patience does owner Joe Tsai have with Irving? Communication has been minimal, but the front office has made it clear that they’re unhappy with the superstar’s actions.

The NBA is currently investigating whether Irving violated their Covid-19 protocols for not wearing a mask and attending a birthday party with a group of people. The league may be looking to fine Irving up to $400k per game if he’s forced to sit out due to a violation of their health and safety protocols.

With the NBA conducting an investigation into the apparent birthday party video, not the Nets nor Kyrie Irving dictate his return date. Now, the league office can rule on possible protocol violations and mandated time away in quarantine — based on findings.

If Brooklyn’s Kyrie Irving is found to have violated league health/safety protocols, he's facing a proportional game reduction of 1/81.6 of his salary – $410K per game. He would forfeit that money for every game lost because of a mandated isolation. League's probing video now.

Just a complete mess in Brooklyn.