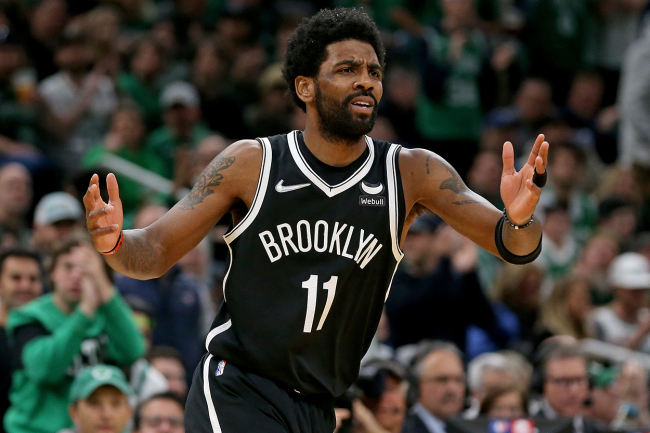 Kyrie Irving did not hold back in Game 1 of the first round of the NBA Playoffs. Not only did he go for 39 points, but he embraced the hate thrust upon him by Celtics fans and chirped back both vocally and with his body language.

As a result, Irving received a $50,000 fine for flipping off the bitter Boston fans.

That was not the case during Game 2. Irving was hardly heard from.

After the Nets fell to the Celtics to open the series, that was again the case on Wednesday night and Irving scored only 10 points with eight rebounds. He was also silent in a literal sense.

Irving hardly said a word to Boston fans, who were just as ruthless as they were in Game 1, and kept his middle fingers to himself. It was a total 180-degree change from the series opener.

During the game, a group of Celtics fans got on Irving over his lack of chirps back to them. They were wondering why there was such a sudden change in attitude and demeanor.

In a video captured from courtside seats, Irving can be seen explaining why he kept his mouth shut in Game 2. It is too expensive to talk back.

On multiple occasions in the video, Irving gives the money sign with his hands. He also brushes off whatever the Boston fans might be saying to him about why he stayed quiet, and then doubled down on the cost.

Irving will be at home for Game 3, so his wallet is likely safe.