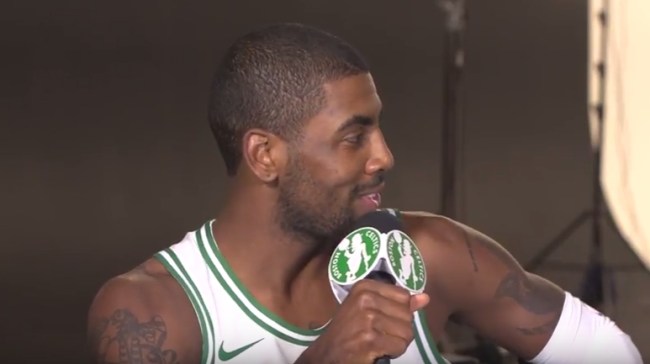 Kyrie Irving’s free agency has been a huge topic of conversation over the past year or so, with plenty of rumors floating around about where the six-time All-Star might end up. While signs are pointing towards Kyrie heading to the Brooklyn Nets — with one report even suggesting there’s already a “verbal agreement” between the two sides — we won’t know for sure what’s going to happen till NBA free agency starts on Sunday.

With Kyrie Irving having plenty of suitors for his services, one team that doesn’t appear to be in the hunt is his most recent team, the Boston Celtics. After a dysfunctional couple of seasons with the iconic franchise, more stories continue to come out about why it’s probably best for both sides to move on.

The most recent one comes from ESPN.com‘s Jackie MacMullan, who detailed a particular incident that happened last season during a road game in Miami that “irked” Kyrie Irving. According to MacMullan, some of Irving’s younger teammates went out to party after 2 a.m., which wasn’t up to the standards of a one-time champion who was hoping to build a championship culture.

“On Jan. 9, the Celtics blitzed the Indiana Pacers at home, then flew out that night to Miami, arriving at the team hotel after 2 a.m. on Thursday. Boston was set to play the Miami Heat that night, but, team sources said, that didn’t stop some of the young players from heading to South Beach, where the clubs stay open well past 5 a.m. It’s not uncommon for NBA players to go out when they’re on the road, but Irving was irked teammates decided to do it in the middle of back-to-back games.”

The MacMullan piece also added plenty of other tidbits that suggest Kyrie Irving’s time with the Celtics is probably over, which, again, might be best at this point. Included in it are reports that the point guard even told the team after the season that he was “not interested” in signing 100 basketballs for charitable partners, even though the rest of the team did.

A few teams have said to be “wary” of signing Irving because of the toxic seasons he had with the Celtics, but given his age and immense talent, it’s safe to assume the guy’s about to get a massive contract somewhere to become the face of a franchise again. Whether that means teaming up with another superstar like Kevin Durant on the Nets — which is their “dream scenario” — or considering a reunion with former teammate LeBron James on the Lakers is left to be seen. But Irving’s probably not going to re-up with the Boston Celtics, and this most recent report is another good reason why.