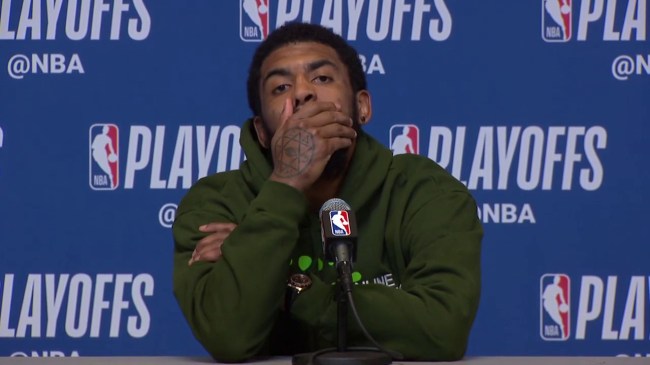 Kyrie Irving will become one of the most highly-coveted free agents in the NBA in less than a week, and, as has been the case all year long, there are a lot of rumors about where the six-time All-Star may end up. While most of those center around Irving joining the Brooklyn Nets or New York Knicks — with the former being the more favored destination — one report already claims that the Nets and the superstar player already have a “verbal agreement” in place prior to the league’s free agency beginning July 1.

The report comes from Anthony Puccio of NetsDaily, who said that several sources he’s talked with believe it’s a done deal for Kyrie Irving to join the Nets. Here’s what Puccio’s hearing.

Several sources —on several occasions— have told NetsDaily that Kyrie Irving is likely headed to Brooklyn, one source saying it sounds like a “done deal”. Another source tied to the Nets believes there is already a verbal agreement in place.

Of course, the most shocking news of all this is that there would be a verbal agreement already in place between both Kyrie Irving and the Brooklyn Nets, which would take any drama out of the one-time NBA champ’s decision in less than a week about where his basketball future might be. However, given the fact there’s tons of speculation that Irving is trying to bring another superstar to join him anywhere he goes — namely Kevin Durant — if Puccio’s report is true, it means Irving has the next week or so to convince either KD or another All-Star to move to Brooklyn with him.

Some teams have reportedly been scared off by Kyrie Irving’s toxic season with the Boston Celtics last year, but it doesn’t sound as of the Nets are one of those franchises; well, at least not unless it’s only him they’re getting. With enough room to sign two max players, should Irving join Brooklyn and get another star with him, the entire NBA landscape would instantly change.