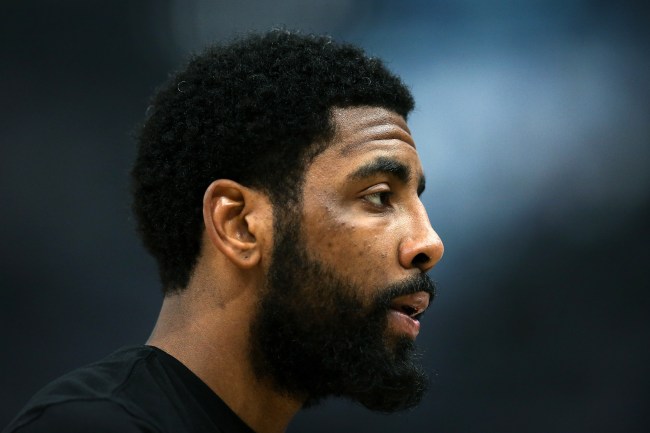 Kyrie Irving’s free-agency has long-been a topic of conversation in NBA circles over the past year or so, as the six-time All-Star is set to become one of the A-list talents this summer. While there have been reports that the former No. 1 overall pick is destined to team up with Kevin Durant on the New York Knicks — with Stephen A. Smith saying it’s almost positively happening — there are other rumors out there that Irving could reunite with his former Cleveland Cavs teammate, LeBron James, on the Los Angeles Lakers.

Well, considering it’s the NBA’s silly season and reports are flying from all angles about Kyrie Irving’s upcoming free-agency, FS1’s Ric Bucher added another juicy detail to the narrative today, suggesting that Irving’s being recruited by his longtime mentor, Kobe Bryant, to join the Lakers. But, even with that allegedly going on behind the scenes, it’s the Brooklyn Nets who are the favorites to land the one-time NBA champ this summer. Take a listen at what Bucher had to say earlier today on The Herd with Colin Cowherd.

"It's between Brooklyn and the Lakers… I was told in the last 24 hours Kobe has been recruiting Kyrie in particular, to get him to the Lakers. Everything I've heard I would still expect Kyrie is going to go to Brooklyn… He just bought a place in South Orange." — @RicBucher pic.twitter.com/HICrTPushl

The Brooklyn Nets are a trendy team this offseason because they’re young, they overachieved this season to reach the NBA Playoffs, they have cap room to sign a star to add and, in Kyrie Irving’s case, he’s from New Jersey, so Brooklyn is close to home for him. Of course, there are some concerns about Irving playing alongside fellow All-Star point guard D’Angelo Russell if the two were paired together, but, per Brian Lewis of the New York Post, team execs aren’t concerned about such questions.

A source tells me that there are some within the #Nets organization that feel a D'Angelo Russell-Kyrie Irving pairing could work, that the two All-Star point guards could not only coexist but thrive. Story on the way.

Who knows where Kyrie Irving will end up this offseason, but the Brooklyn Nets have been linked to him before — with his former general manager with the Cavs, David Griffin, suggesting a couple months ago that the Nets could be a darkhorse contender for his services. While some say there are concerns about his lingering injuries and overall attitude after a couple of bad years with the Boston Celtics, Irving’s going to make bank this summer, it’s just on him to decide what destination gives him the best chance to continue to build his legacy.