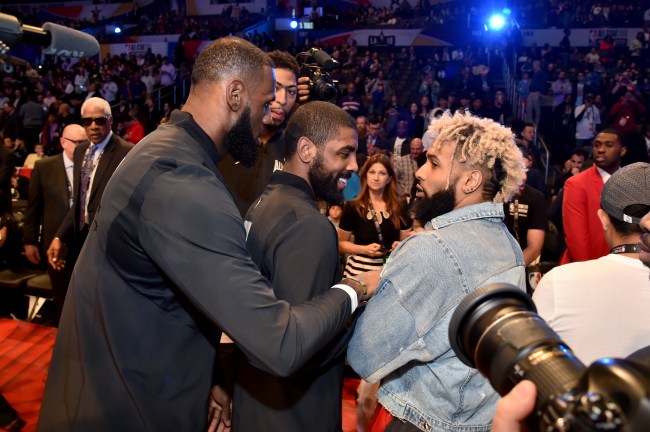 Last night the LA Lakers were finally able to acquire Anthony Davis after attempting to pick him up via trade since last February.

Now that the Lakers have AD the next order of business is to find a third superstar to form a super team and it appears that LeBron and his camp believe Kyrie Irving could be that player.

According to The Athletic’s Sam Amick sources close to LeBron James believe there’s a chance Kyrie is “still in play” for the Lakers despite rumors that Irving to the Nets was already a done deal.

And now, with the Lakers still capable of creating enough cap room for another max-salary player in time for the start of free agency on June 30, there’s a very real possibility that one of the many available top-tier talents could decide to join them and form the kind of superstar trio that LeBron was accustomed to both in Miami and Cleveland.

Could it be Kyrie Irving, whose frustration with the Celtics experience has been well chronicled and who has been tied to the Brooklyn Nets in recent days? It certainly matters that the two former Cavs co-stars reconciled back in January, when our Joe Vardon detailed the apology phone call heard ‘round the basketball world. What’s more, it was also clear back then that James was open to the possibility of a reunion. Just days before the Davis deal was done, a source close to James indicated some optimism that – Nets noise be darned – Irving was still in play for the Lakers..)

Bobby Marks on now. Saying Davis IS NOT waiving $4M trade bonus. Lakers OUT of running for Kemba Walker and Kyrie Irving. pic.twitter.com/3SyQKsI0R3