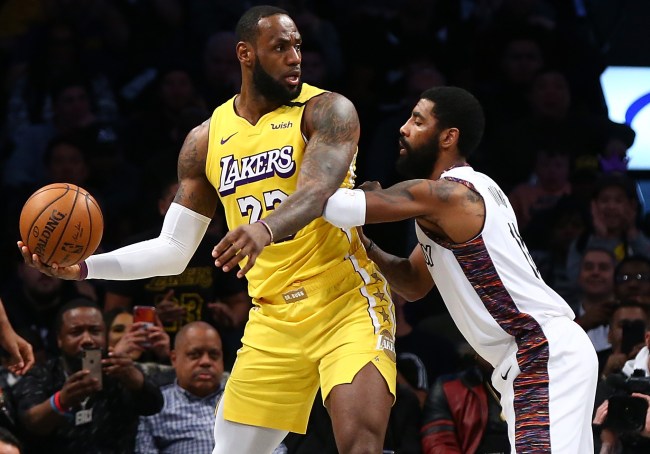 There were plenty of questions about whether or not the action inside the NBA bubble would be able to measure up to the quality of play fans are used to but the answer has been an absolutely resounding “Yes,” as we’ve been treated to plenty of late-game heroics and unexpected upsets courtesy of some unlikely sources in the lead-up to the Finals matchup between the Lakers and the Heat.

However, the real reason I love the NBA has less to do with the product on the court and more to do with the drama we’re routinely treated to off of it courtesy of a collection of players who have a truly unparalleled ability to stir up shit at a rate no other league can come close to matching.

Kyrie Irving has been an incredibly consistent source of controversy over the years thanks to his, um, interesting thoughts on the flatness of the world and the existence of dinosaurs but he’s also been at the center of a number of basketball-related controversies thanks to his proclivity to butt heads with his teammates at some point on basically every team he’s played for.

This is due in no small part to an ego that played a major role in his departure from Cleveland after seemingly getting fed up with having to play in LeBron James’ shadow but things didn’t exactly work out too well when he took his talents to Boston before ultimately deciding to join forces with Kevin Durant on the Nets last year.

KD has yet to play a game for Brooklyn and consequently couldn’t do anything to prevent the team from getting swept by the Raptors in the first round of this year’s playoffs. With that said, Irving seems to be optimistic about the future based on some comments he made during a recent podcast appearance that managed to rustle plenty of jimmies.

Part of the reason James will go down as one of the best players the NBA has ever seen is that he’s repeatedly proven he possesses the hallowed “clutch gene” thanks to the many occasions where he’s stepped up when the game is on the line, but based on what Irving has to say, he doesn’t seem to buy into the hype.

It’s hard to interpret that quote as anything but a shot being fired in LeBron’s direction, but after it began to make the rounds on Thursday, Irving attempted to do some damage control and he blamed the media for taking a quote that can’t really be taken out of context out of context.

“Why must it always be brother against brother? Why? If I’m addressing anyone, I’ll say their name.”

Kyrie denies taking shots at LeBron after his comments on KD’s podcast pic.twitter.com/2LSnCv6Dby

“Why must it always be brother against brother? Why? If I’m addressing anyone, I’ll say their name. Come on y’all; don’t listen to the false narratives. Let people live their lives.

It’s just a game. Talk about the art, talk about the sport. We talk openly, we talk freely, but because we live in a clickbait society, it becomes something bigger. You don’t have to defend it. That’s just what media is; it’s entertainment. I’m not going to let it put me against anybody anymore at any point because that’s not what it’s about.

We talk freely, openly, and that’s our society. Say how you feel. Don’t have to put me against anyone else. It’s never been about that. It’s about the love. Peace.”

Again, I’m not exactly sure what point Irving is trying to make here. Sure, he technically didn’t say anyone’s name, but when you consider he was referring to literally every person he’s ever played alongside, that probably would’ve taken a pretty long time.