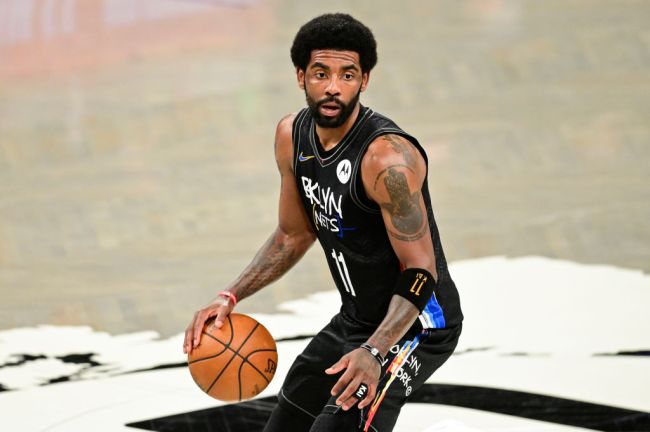 Stop me if you’ve heard this before but Kyrie Irving is giving an entire fanbase a collective panic attack.

For Brooklyn fans, and before that Bostonians, every time Kyrie’s name trends on social media it is accompanied with the dread typically reserved for receiving an urgent work email on vacation.

Luckily for Nets fans, this time it appears Kyrie was dragged into the mud by no fault of his own by Nick “The Click” Wright.

The idea that Brooklyn would trade Kyrie after owner Sean Marks said he expected to have Harden and Irving’s extension “signed, sealed and delivered” by training camp, appears to be fantastical manufactured drama.

Irving, who three weeks ago claimed he was ready to take advantage of the opportunity to use his “god-given talent,” responded to Wright by calling him a “puppet.”

Wright then countered with the following:

Kyrie, if you’re saying you didn’t say you’d retire if you were traded, then your beef is with your representation, not with me, because you and I both know that’s what they’ve told people.

Irving finished last season averaging 26.9 points per game, but missed 18 of a possible 72 games for a cornucopia of reasons—face, groin, shoulder, back, finger, rest, and 9 for personal reasons.

The 29-year-old consistently publicizes how basketball is just one slither of his life’s pie, so on the surface Wright’s claim doesn’t seem too off-the-tracks. But who to believe: Bloviating Nick “The Click” or the guy who promised Boston fans he’d return and peaced out on the very next Lucky Star bus?