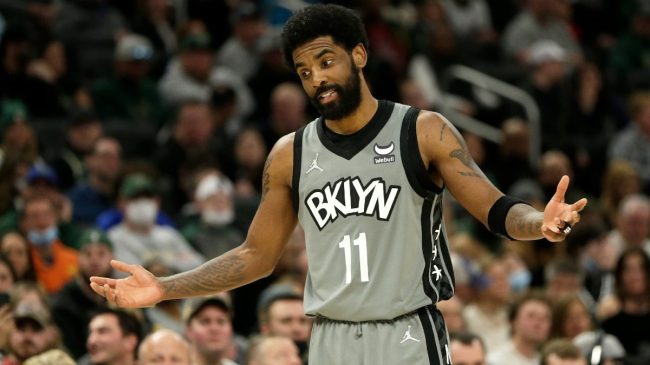 Kyrie Irving wants the world to know that he does not care whether you sports betting parlays cash in or not.

Like many professional players at one point or another, Irving has received undue criticism after underperforming against the Vegas lines. And like most others, he couldn’t care less if it ruined your betting slip.

Teammate Kevin Durant voiced a similar opinion earlier this NBA season, though he did seem to enjoy the power he now holds over sports bettors.

When them parlays don’t hit. This is for years of slander from nba fans, im grateful I have this much power now. 😁 https://t.co/RSFaryY7Sc

Athletes are unjustly judges at times based on these sports betting props and parlays. They have no control on where a line might fall or how many folks are choosing to add them to the ticket. They just go out and play, hoping that their team can bring home a W.

So when fans berate them online with postgame criticisms for not hitting a certain mark, it grows frustrating.

Irving let out those frustrations while in an online gaming session this week. He let everyone involved know that he doesn’t give a damn about your wagers.

You can add Kyrie to the list of players that don't care about your parlays 😅 pic.twitter.com/H57USdJkyG

In an online gaming session this week, Irving went on a long-winded rant about fans that bash him for their losing bets. He had a lot to say on the topic.

“When I hear the conversation about people’s ticket, and it’s on my Twitter or it’s on my feed or something like that, y’all literally live in a fantasy world, bro. Y’all literally watch the stats and think that players are robots, bro. Like, ‘Yo, how you not gonna hit my 22.5??’

“You know what I tell everybody? Come do my f—-ing job, then.”

It’s not the first rant that Irving has gone on this week. He called his critics “cockroaches” during a Twitch stream on Tuesday night.

If you’re thinking about adding Irving to your next betting slips, just know that he’s not all that interested in your wagers hitting.