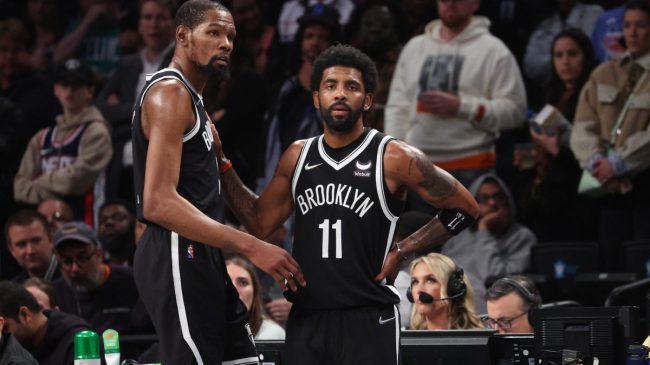 If the Lakers have it their way, they’ll have both KD and Kyrie next season.

Reports have surfaced saying that the two still want to play together, just not in Brooklyn. This comes after Irving announced his intention to sign his fourth-year player option with the Nets for $37M.

Many believed that that move solidified his standing with the franchise, with many expecting him to return with Kevin Durant. But apparently too much damage has been done.

Durant asked for a trade earlier Thursday, and he’s now picking out possible destinations. Of course, the Nets will have to agree as they’ll want to get something in return for the superstar.

The Suns and Heat jumped out as the frontrunners, but a recent interview from NBA insider Brian Windhorst reveals another possibility.

The Lakers are forming a package to land Kyrie, KD

"The Lakers potentially have a package for Kyrie Irving and Kevin Durant." – Brian Windhorstpic.twitter.com/BZZt0jpfPs

Windhorst says that the Lakers “potentially” have a package in place to land both stars. Assuming that wouldn’t involve trading LeBron James, Los Angeles would immediately become a championship frontrunner with a three-headed monster of KD, Kyrie, and LeBron.

James has played with Irving in the past, winning a title with the Cavs in 2016. Now, it’s possible they reunite while adding even more talent in Durant.

Here’s what Windhorst had to say.

“It has been floated to me by executives that if they were to be kept together, the Lakers potentially would have a package that you could trade for both of them. But we don’t know. It’s too fragile because we don’t know where KD and Kyrie are and if they’re still interested in [playing] together.

“After seeing what happened when they were together, almost no team with options would do it. But the Lakers don’t have options.”

What that package would entail one can only guess. You’d have to think Anthony Davis would be a likely part as he’s the best player they have outside of LeBron. A plethora of draft picks could be enticing, too.

If this does somehow come to fruition, the Lakers would have the best roster in basketball. But that’s a HUGE if at the moment.