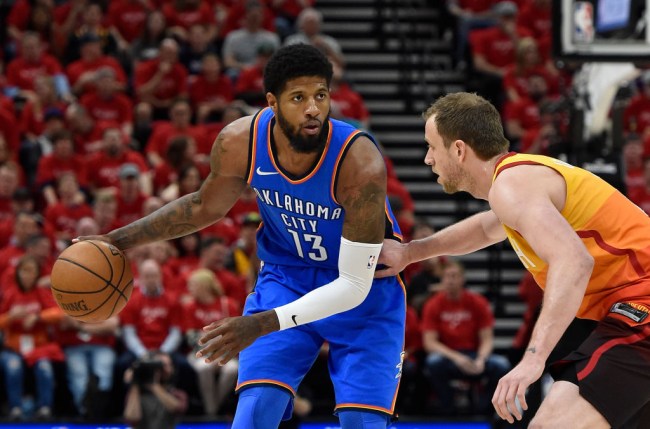 Paul George is one of the big names that will be heavily recruited by NBA teams once free agency starts on July 1st. It seems like the Lakers, who are very interested in George’s services, will try to pull at his heartstrings and try to convince to come play close to his hometown of Palmdale which isn’t too far from the bright lights of L.A.

Today, Sports Illustrated released a leaked script that was intended to be used in a video for Paul George’s recruitment pitch and the Lakers made sure mention George’s hometown several times.

The person recruited to do the voiceover was told that it should be “less Morgan Freeman/Denzel Washington, and more Jamie Foxx.”

The pitch entitled “Two Dreams” makes hints about who the pitch is for.

When you were just a kid

In your room
Dreaming from Palmdale

We were dreaming too.

While you dreamt, we built – built for your arrival

And while we dreamt, you built too
Becoming one of the world’s greatest.

Life’s most powerful dream are the one we realize ourselves.

The ones that turn us into legends.
That kid from Palmdale always knew it
Now the world will, too

As of now it seems like George is torn about whether to stay in OKC or leave and join the Lakers.

“He keeps going back and forth of what he wants to do.”

We’ll see if the Lakers can eventuallu convince PG to come L.A. this offseason.