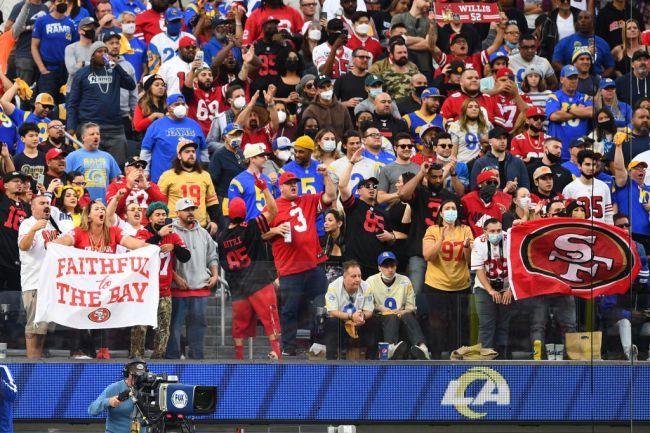 A few weeks ago, Niners fans came out in droves and caused problems for QB Matt Stafford.

“It did catch us off guard,” McVay said, via ESPN. “Just because of the way that it’s been this year. It’s been great, great atmosphere, great environment. Yesterday was the same thing, but there was a lot of red there. That was definitely a surprise.”

Stafford said the Rams had a hard time getting plays called with the 49ers’ crowd noise advantage. “It was a tough environment for us to communicate in really the whole second half,” said Stafford.

The Dallas Cowboys know all too well how 49ers fans can take over a stadium and now they will have to worry about the same thing when the teams square off against each other in the Wild Card round.

The Rams will be hosting the Niners again at SoFi stadium for the NFC championship game, but the home team is implementing a stringent ticket policy to prevent fans who reside outside the city of LA from attending the game.

It appears the Rams are already afraid that the 49ers will again make SoFi Stadium their home — they're trying to restrict ticket sales for a potential NFC title game by geography.

IMO pathetic and also premature — LA isn't even in the title game yet pic.twitter.com/G8VmbG9muv