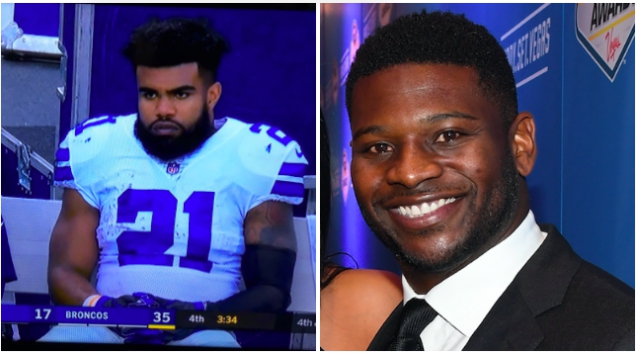 Through the first two games of the 2016 season, the eventual NFL’s leading rusher posted 239 yards and three touchdowns. This year, amidst an ugly convoluted scandal, Elliott has just 112 yards and zero scores through two contests. Yesterday, Elliot had just eight yards on nine rushing attempts. For context, Tom Brady had one more yard rushing than Elliott did. Yikes.

It’s still very early, yes, but what’s more worrisome for Cowboys’ fans has been Elliott’s body language when the boys aren’t performing to the level of their dominating 14-win season a year ago.

I present to you Exhibit A. Check out Elliott flat out give up after Dak threw an interception in his vicinity in the middle of the third quarter with the Cowboys trailing the Broncos 28-10. Zeke ran a 4.47 40 yard dash in the combine, you can’t tell me he wouldn’t have saved his defense a handful of yards here.

Ezekiel Elliott has decided to accept his suspension from Cowboys effective immediately after this interception pic.twitter.com/fCYOk6XoBD

Elliott was also seen sitting by himself during the third quarter with a huge puss on his face. Former running back turned analyst LaDainian Tomlinson did not mince words when assessing Zeke’s demeanor.

Granted, one could argue that this is the pot calling the kettle black, as Tomlinson had his phases during his career with San Diego, but the sentiment is true: if Dallas wants to get back on top of the mountain, their top player needs to stop acting like a baby back bitch.

Rich Eisen with the boom roast.

The @Broncos doing what the #NFL could not: effectively removing Ezekiel Elliott from the game.