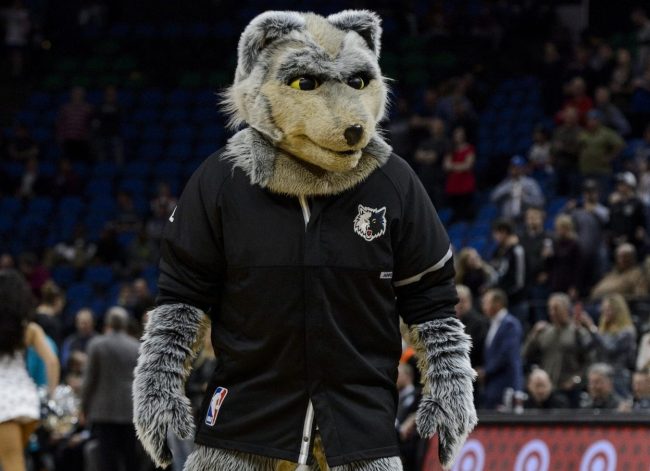 One of the luxuries that comes with the holiday season is the ability to consume large amounts of food and drink and being able to blame it on the season. However, for one Lakers fan, a recent in-game promotion might not be what he had in mind.

During Sunday night’s game between Los Angeles and the Timberwolves, two fans were pulled from the crowd. They were offered an opportunity to compete against each other for a prize. All pretty standard stuff.

The competition was anything but.

A Lakers fan and a T-Wolves fan were sat next to each other and blindfolded. Then they were tasked with drinking a giant measuring cup of eggnog through a straw as fast as they could in an effort to beat their competitor.

From the second that the chugging contest began, the Minnesota fan was absolutely dominating. When he was halfway through his eggnog, the Los Angeles fan was barely past the first measurement line and never stood a chance.

To make things worse, the Timberwolves mascot provided a little bit of a home-court advantage for the home team fan. As the Lakers fan continued to chug, the mascot snuck up to the table and continued to fill his measuring cup with more eggnog.

Although he had a clear disadvantage, the L.A. fan was going to lose anyway. His reaction when the in-stadium announcer ended the competition and had the two competitors take off their blindfold is priceless.

The @Timberwolves really had an eggnog chugging contest 😳

Minnesota absolutely dominated the competition, but there is no way that his stomach was feeling well afterward.