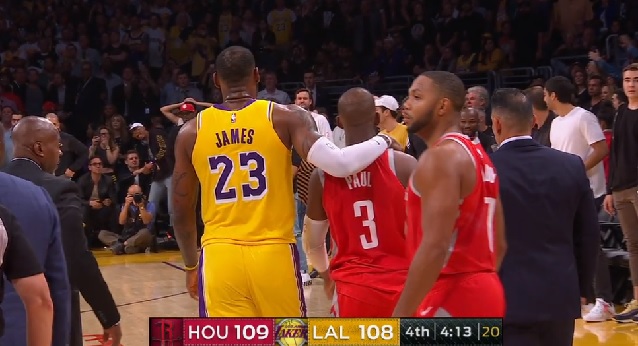 Things got heated tonight between the Lakers and the Rockets when Rajon Rondo and Chris Paul started throwing haymakers at each other during a heated confrontation.

LeBron James found himself in the middle of fracas and decided to hold back friend Chris Paul during the brawl.

LeBron backs up Chris Paul and not Rondo, his own teammate hmm 🤔 pic.twitter.com/od87QFhwOw

LeBron could later be seen consoling Chris Paul and trying to get him to calm down.

After the game LeBron was heavily criticized by Lakers fans on Twitter for being “too friendly” with CP3 and not backing up his teammates.

I personally didn’t like LeBron going to CP3 after the Rondo fight. I understand that Bron and he are friends but not in uniforms. #LakeShow #HOUvsLAL #NBA #NBATwitter

I don't see any video of Rondo spitting. Is it possible spittle came out while jawing? Of course. Cp3 always flopping and starting drama. #lakers Ingram lost his cool no doubt but he had his teammates back. Once coaches had cp3 LeBron should have went to teammates. Bad look!

Hey LeBron Rondo is your teammate. That’s why I don’t like these off season romances. If I were his Lakers teammates I’d want to know how LeBron ended up protecting his friend & not his teammate. #LALvsHOU

I HATE that Lebron chose to hug CP3 while everything was going down….BAD BAD look from our leader.#NBA #LakeShow

@MikeSportsLA Like I said before, LeBron allowed Paul, Harden, and Carmelo to punk his teammates and he did nothing about it. Too friendly. This is not about friends on the court. #LakeShow

LeBron, you’re a hypocrite, you took sides with CP over every one of your teammates. Wear the Purple and Gold with honor https://t.co/3I6gXjLiGm

Rondo should swing on Lebron too.. How the hell you not gon back your teammates? I understand CP3 is your boy, but damn LMFAO

I know that's LeBron BFF and all but he didn't even try to be there for his teammates. Went straight to CP3. Lmao that locker room gonna be in shambles by Allstar break

We gonna talk about how LeBron helped out Chris Paul and not his teammates in that fight right?

Even Stephen Jackson had some thoughts on LeBron’s alliances.

Don’t mind me I’m just here to see who ain’t doing nothing. Who ain’t gone ride for they teammate. That’s all. Don’t mind me. GN World. Love to all. #GBG https://t.co/veTUBj1ZJS