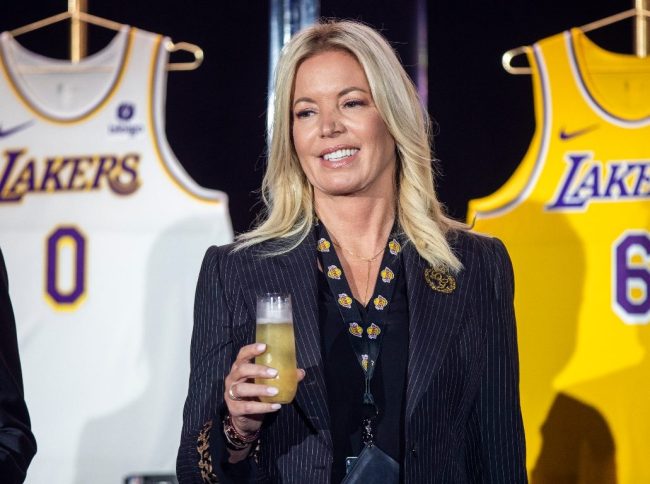 The Los Angeles Lakers are known to reel in superstars from all around. They have some of the most star-studded fans in all of sports. For that reason, there have to be some weird or funny things that happen behind the scenes when these celebrities attend a game. Finally, we have some inside information from the Lakers owner Jeanie Buss, as she explains a hilarious occurrence with OJ Simpson.

During an appearance on Jimmy Kimmel Live, Buss was interviewed by Desus Nice as he filled in for the regular host. Nice asked Jeanie Buss to describe the weirdest thing that has happened to her while running the organization. She immediately dives in on the time OJ Simpson visited a Lakers game right after he was acquitted. However, she delivers a zing at the very end of her story you have to hear!

“You just can’t get away with everything, right?”

On the weirdest thing that happened while handling the Lakers, Jeanie Buss shares this story on OJ Simpson 😳

Jeanie Buss off the top rope! For any young readers not familiar with OJ Simpson, the former NFL star was accused of murdering his ex-wife Nicole Brown Simpson and her friend Ronald Goldman. He was eventually found not guilty. How Buss’ story didn’t come to fruition sooner is amazing. Even so, the Lakers owner didn’t hold back while appearing on Jimmy Kimmel Live.

We’re sure the Buss story has plenty of stories to share. Luckily there’s a Lakers documentary that just released on Hulu on Monday night. There should be more hilarious tidbits throughout the film, as Los Angeles is one of the most historic franchises in the NBA.