Fans Were REALLY Not Feeling The Lakers’ New ‘Statement’ Uniforms, Rip Them To Shreds On Social Media 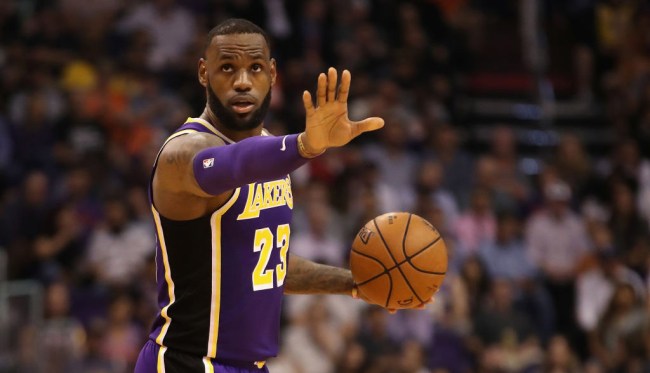 As if it isn’t hard enough for NBA fans to wrap their heads around seeing LeBron James wearing a Los Angeles Lakers uniform, the league just went and made it even more difficult with the team’s new “Statement” uniforms the team debuted on Wednesday night at Talking Stick Resort Arena. (No, I am not kidding. That really is the name of the Phoenix Suns’ arena.)

These new uniforms are the Lakers’ 2018-2019 “Statement” edition and, well, they definitely made a “statement.” Just not a very good one.

Of course, you can’t avoid giving them a good look when you are, you know, watching the actual game, so reactions to the new unis came fast and furious throughout the night on social media. Admittedly, not everyone hated them, but the many who did were very vocal about it.

The Lakers will be debuting their “Statement” uniforms tonight on the road in Phoenix. They’d be infinitely better without that black stripe down the sides. pic.twitter.com/L8uYTBlg3T

Those Lakers purple uniforms look way better on the players than I expected. I still don’t get the black on them though.

These lakers uniforms trash wtf is that stripe

In other news, the Lakers uniforms in Phoenix tonight are even worse than I imagined. The black stripe really has to go. What's the point?

Our colors are purple and gold. Not purple, black and gold. #LakeShow

This Lakers uniform offends me.

On the plus side, the Lakers did finally get their first win of the season so maybe these ugly new uniforms are… lucky? Silver linings, folks. Silver linings.