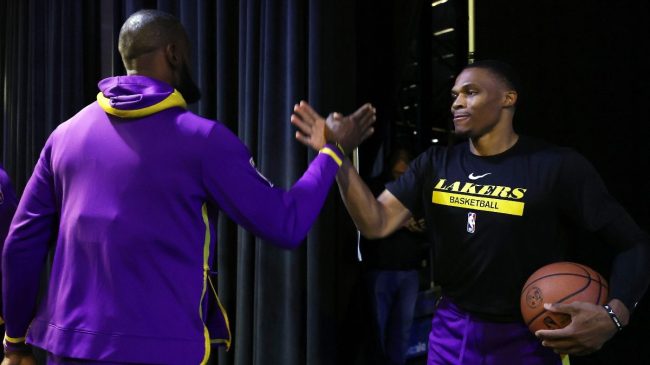 The Los Angeles Lakers fell short in the season opener against the Golden State Warriors. However, all eyes are on Russell Westbrook right now, as the veteran guard suffered a hamstring injury, resulting in him coming off the bench. Oddly enough, Westbrook finds a way to blame Darvin Ham for the injury he sustained.

According to ESPN, “Russell Westbrook said he ‘absolutely’ believes that Los Angeles Lakers coach Darvin Ham’s decision to bring him off the bench in LA’s preseason finale could have caused the hamstring strain he suffered that night.”

It’s a rather wild claim overall. Westbrook doesn’t hold back as he clearly felt confused coming off of the bench in a preseason matchup. “I’ve been doing the same thing for 14 years straight. Honestly, I didn’t even know what to do pregame. Being honest, I was trying to figure out how to stay warm and loose. … That’s something I just wasn’t accustomed to.”

Essentially, it sounds like the Lakers star just didn’t warm up for that preseason game properly, per David J. Chao. Even so, it’s not like Russell Westbrook has never come off of the bench before. He’s done it with Team USA and All-Star games throughout his career. So it’s still rather odd for him to blame Darvin Ham for the injury.

Not being "warmed up" can contribute to muscle injury but I am sure a veteran player in his 15th season can figure it out. A bigger contributing factor is more hamstring injuries early season due to acclimation and age doesn't help either. https://t.co/f1dFpVw3Nc

Russell Westbrook was in the starting rotation for Tuesday night’s season opener against the Golden State Warriors. The injury didn’t seem to bother him too much, as he played a full game without any hiccups. Even so, his efforts weren’t enough to help the Lakers earn a win to start the season. Ultimately, the team looked rather flat, but luckily there are 81 other games on the schedule.

Keep an eye on the Lakers’ guard. Westbrook has been involved in numerous trade rumors throughout the offseason. Additionally, he aims to have a bounce-back year after struggling last season in LA. Hopefully, the injury doesn’t hinder him too much.