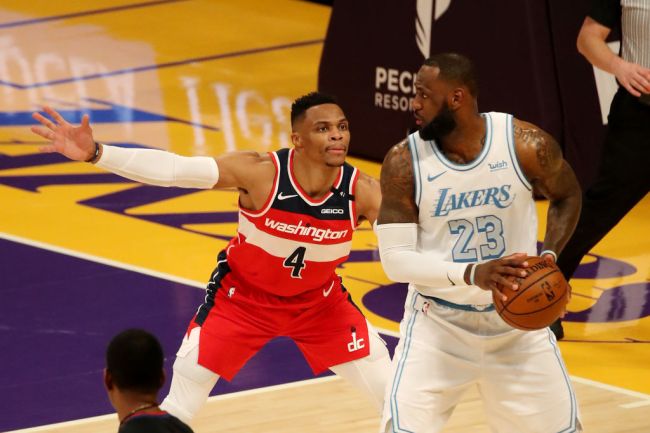 The Lakers new big three of LeBron James, Anthony Davis, and Russell Westbrook reportedly met weeks before the team’s big trade and NBA fans aren’t too happy about it.

On Thursday the Lakers made a blockbuster trade to bring in Westbrook from the Washington Wizards.

According to the LA Times’ Broderick Turner, LeBron, AD, and Westbrook met a LeBron’s home in LA to have a conversation about they would fit together if the team traded for Westbrook.

About two weeks ago, Russell Westbrook went to LeBron James’ home and together they and Anthony Davis had a conversation about the All-Star guard joining James and Davis on the Lakers.

They talked about putting their egos aside and playing as one in their quest to bring the Lakers another NBA championship. Westbrook talked about how his only intention was winning and coming back home to Los Angeles to become a champion.

Westbrook let James and Davis know he doesn’t mind playing off the ball when James initiates the offense, something he did while playing alongside James Harden with the Houston Rockets.

The NBA’s anti-tampering rules are pretty strict against allowing teams, players or coaches from trying to lure players on rival teams when they are under contract which seems to be the case here. It is worth noting that back in 2018 the NBA sent out a memo warning teams about their anti-tampering rules after LeBron made comments about possibly playing alongside Davis before he was traded to the Lakers.

Fans immediately complained on the Internet that the Lakers got away with tampering in the Westbrook trade and are calling for the league to fine the team.

The nba says it cares about tampering. Whole dog/pony show on rules to crack down. Has been reported by top notch reporters LeBron and AD tampered tog get Russ and KD tampered to get Harden.

If nba REALLY cares about tampering it would do something. But it doesn’t, so it won’t https://t.co/fcDkX6RapB

That sounds like tampering to me, a LeBron James' special https://t.co/1WZ6ghDMmz

The Bucks lost a first round pick over a tweet…… Either enforce tampering or don’t https://t.co/OSR0IDiVfT