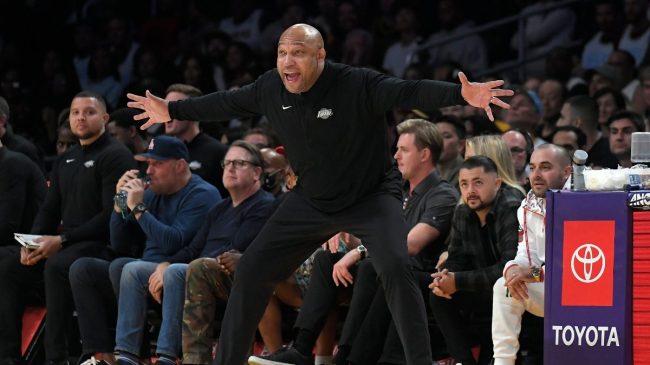 The Los Angeles Lakers finally recorded their first win of the 2022 regular season and are now 1-5. It’s been a slow start for this squad, but they finally earned a victory. It was a big moment for Darvin Ham, as it was the first win of his career as a head coach. However, LeBron James and the team might have been a bit too celebratory, as LA is getting torched for it online.

In a quick clip, LeBron James, Anthony Davis, and everyone else dumped water all over Darvin Ham. It’s a huge milestone for his career as he hopes to achieve many more victories as the Lakers’ head coach. It’s actually pretty cool to see a team this excited for him, as it’s a great bonding moment for the entire organization.

Even so, the Lakers are 1-5 on the season so far. It’s been a struggle as they haven’t looked smooth on the court. For that reason, NBA fans couldn’t resist roasting Los Angels celebrating their first win six games into the year.

Swap out water with champagne and it’d look the exact same.

I’m waiting for the trophy celebration. Is there any?

This is just a tad dramatic.

Most embarrassing video of all time

We can’t help but wonder how Kobe Bryant would feel seeing this clip.

Hey, at the end of the day, Darvin Ham secured his first win as a head coach of the Lakers. That’s a huge achievement, even if the team is currently 1-5. Maybe this win can turn things around for the club. Luckily for Los Angels, it’s a long season ahead.