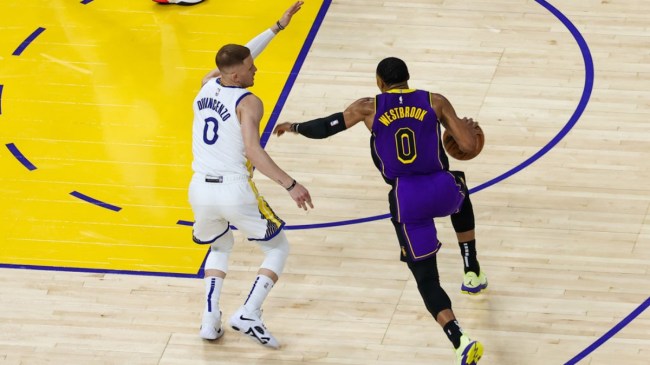 The Los Angeles Lakers are just 4 games into the new season, but it is already clean that something needs to change for them. They are currently 0-4 and have been by far the league’s worst shooting team.

It is unfortunately going to be difficult for the Lakers to fix their issues with the roster they currently have assembled.

However, it appears they have something new they want to try to see if it helps the team improve at all. According to ESPN’s Adrian Wojnarowski, the Lakers are moving Russell Westbrook to the bench for the foreseeable future.

Westbrook coming off the bench is the Lakers' plan for the foreseeable future, sources tell ESPN. They'll see how it goes tonight — barring Anthony Davis needing to sit out with his back. https://t.co/vmTiQQTsKu

Hopefully the Lakers invest in a stationary bike or something to help Westbrook stay loose before he enters the game so he doesn’t pick up any more injuries as a result of this decision.

This move will most likely make Westbrook the most expensive 6th man in NBA history. While that is going to come with some bad optics, it could be a good move for the Lakers. It will prevent Westbrook from having to play off the ball as much as he does in the starting lineup. He’d also give the Lakers an edge against opposing benches.

At this point, the Lakers have to try whatever they can to get themselves in the win column and it looks like this will be the first move they make to try and change things up.