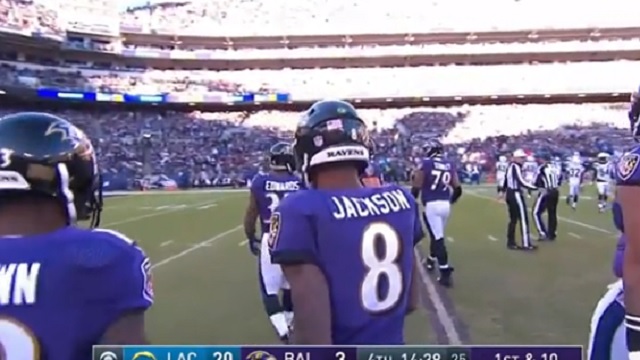 Rookie QB Lamar Jackson had a rough outing against the LA Chargers in his first playoff game.

As Jackson and the Ravens offense struggled to score against a tough Chargers defense, Jackson got loudly booed by the home crowd in Baltimore.

Lamar Jackson went from the second coming to getting booed by his own fans in like a week, hahaha this is bakers division #2019herewecome

The Internet had mixed reactions to the crowd booing Jackson in his first playoff game.

For all you “FAKE ASS” Raven fans bashing Lamar Jackson and wanting Flacco to play. Flacco’s 1st playoff start he was 4-10 for 34 yds and int. Ravens rushed for over 200yds on 40 rushes in the win. Stop acting like Flacco was Brady of today in his playoff start. FOH.

We knew Lamar Jackson was a bit of a wild card – unproven, a little inconsistent & might struggle if teams knew how to prepare for him.

It didn’t help he couldn’t make throws today — but I don’t think he deserves to be booed.

Lamar Jackson getting booed ain’t right.
He’s a rookie, and raw at that, he got you into the playoffs and he’s met the best 1 2 punch of pass rushers

Even if you want Flaco in the game Raven’s offence are getting outplayed, OLine is getting Maulled and some drops…

Football can be cruel. This AM, Lamar Jackson was the toast of Baltimore. Now he's getting booed off the field.

Even Joe Flacco thought Jakcson getting booed by fans was “fucked up”.

“That’s f**ked up”- Joe Flacco to RG3 as he remains on the bench in a playoff game the #Ravens are down 20-3 at home with -2 passing yards by Lamar Jackson pic.twitter.com/ELphdHBYZo