Future HOFer Blasts Ravens Amid Contract Negotiations: ‘They Don’t Think You’re As Valuable As You Think You Are’ 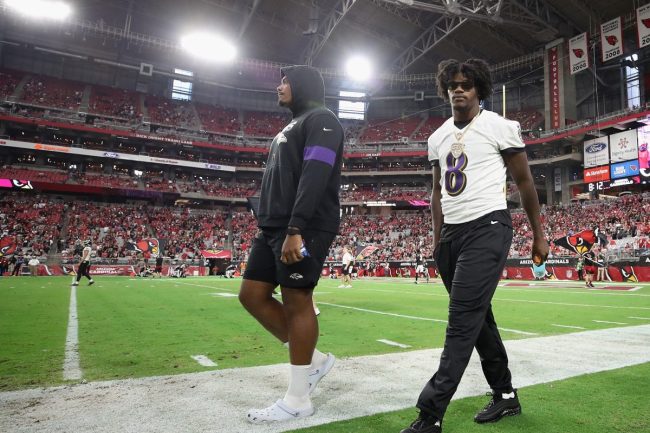 The contract negotiations between Lamar Jackson and the Ravens continue to drag on as the NFL season approaches. The drama has unfolded over the offseason as the quarterback looks to solidify his future in Baltimore.

Jackson has been all business in the negotiations, stating his desire to remain with the team long-term. He’s also not letting it get in the way of his focus for the upcoming campaign.

Still, the fact that this deal has not gotten done could produce tension.

Jackson is reportedly looking for a fully guaranteed deal, similar to what Deshaun Watson got in Cleveland. The Ravens’ front office, though, is saying that the Watson deal was an outlier, and that the extension should be structured more closely to that of Kyler Murray or Russell Wilson.

Former player and future Hall of Famer Jeff Saturday disagrees. He blasted Baltimore for not wanting to pay Jackson his due.

While appearing on ESPN’s Get Up, Saturday said the following about how he views the negotiations.

“The Ravens themselves could do the deal. They are choosing not to do the deal which tells you, ‘I don’t think you’re as valuable as you think you are.”

That statement is telling seeing as the team built their offense specifically around Jackson’s playmaking abilities. And without him in the lineup last year, Baltimore was just 1-5.

Saturday also seems to think that having that deal in place before the season would benefit both Jackson and the Ravens.

“Somewhere down deep inside, your human nature goes, ‘Man, the whole offense is built around me, everything I do, I’m putting my body on the line. Week 6 I’m getting banged up, my offensive line ain’t playing great and my receivers aren’t making plays. What am I doing right now?’ Everybody can tell me how different he is… but we are all still human and if you are sitting with $230M in the bank [you might play different].”

Jackson seems to know his value and is hoping that the Ravens can come closer to meeting his terms. If not, it could negatively affect both sides.