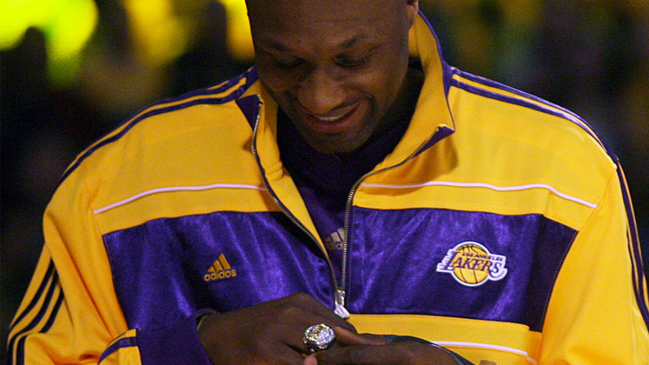 Kobe Bryant and Shaquille O’Neal played an instrumental role in helping the Los Angeles Lakers return to their former glory when the team kicked off the new millennium by winning three consecutive NBA titles.

That dynamic duo disbanded when Shaq took his talents to Miami in 2004. However, the franchise was able to cap off the decade in a similarly successful manner by winning the Larry O’Brien Trophy in 2009 and 2010 with the help of the legendary guard and a supporting cast filled with a number of new cogs Phil Jackson added to his machine following the threepeat.

That included Lamar Odom, who joined the Lakers in 2004 and eventually carved out a role for himself as an incredibly reliable sixth man (he won the annual award reserved for that unofficial position the year after the Lakers won back-to-back championships).

Odom’s NBA career came to an end in 2013, and while he’d struggled with substance abuse issues prior to retiring, he found himself fighting a well-documented battle with addiction after leaving basketball behind—a spiral that culminated with him being rushed to the hospital where he spent three days in a coma after overdosing on a cocktail of alcohol and narcotics inside a Nevada brothel in 2015.

The man who estimates he spent over $100 million on drugs over the course of his life is just one of many athletes who’ve found themselves grappling with some major financial headaches. Those have led to him making some retroactively regrettable moves, including his decision to auction off the two championship rings that ultimately sold for a combined $114,600 at auction in 2020.

However, it turns out that particular aspect of the story has a happy ending.

Odom recently debuted a new podcast dubbed On The Lo, and it was hard not to notice the two massive pieces of bling he had on each hand while recording the inaugural episode.

It didn’t take long for him to address the rings in question, and he shared a fairly fascinating story about how he was reunited with the commemorative hardware courtesy of a very generous fan:

“You see these two rings on my hand? It took a lot of hard work to get these. These are Kobe’s last championship rings.

“There was a time when I came up out of the coma and, you know, I checked my account and s—t was at like, double zero. I panicked a little bit. My mind wasn’t really in the right place, and I put them up for auction—it hurt me just to even say that.

I put the money in my pocket. I put it to use; made some use of it. I think that money kind of even helped me get back here, which is crazy. But it was embarrassing for me to do that.

Some years go by and I happen to make my way back to LA. I go to a Lakers game. They hooked me up with some good tickets. I get there and I see this guy who used to sit right by us—let’s call him ‘France’ for right now. My man France.

So he says, ‘Yo Lamar, I bought your rings.’ I was like, ‘Oh s—t.’ Because at this point, you know, I’m still embarrassed…After getting over that embarrassment, he was like, ‘Yo, just come and pick them up.’

I pulled up on him and he gave me my s—t back—for nothing. Just to do something for nothing. He was the dude…I think it just goes to show you how generous Lakers fans are.”