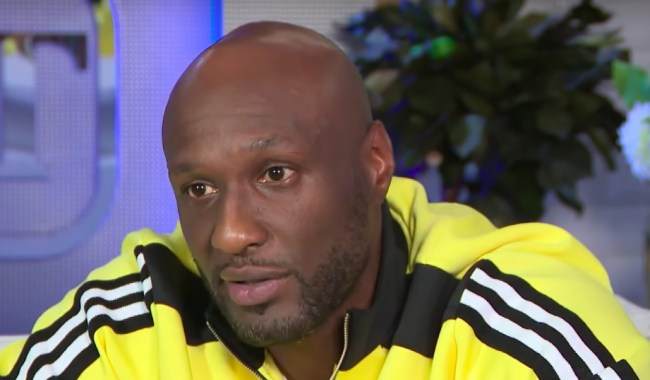 Plenty of professional athletes have experienced a fall from grace thanks to substance abuse problems but I’m not sure if anyone has flung themselves into a deeper abyss than Lamar Odom.

The former Laker experienced a bit of a life crisis after being traded to the Mavericks in 2011 and would enter a downward spiral that culminated in him being found unconscious at a brothel in Nevada thanks to a drug overdose that would result in him suffering multiple strokes and other health issues that would eventually land him on life support.

Odom—who’s currently staging a bit of a comeback—says he’s still experiencing lingering effects stemming from the dark period in his life and has been incredibly candid about his past issues during his recovery process—including a sex addiction he says resulted in him bedding 2,000 women.

However, that number is nowhere as close to as shocking as the one he revealed when discussing his issues with drugs on a recent installment of Entertainment Tonight.

Odom sat down with Kevin Frazier while promoting his new book to address a number of issues, the most notable of which was the staggering amount of money he said he spent on various illicit substances over the course of his career: an almost impossible $100 million.

In 2015, Forbes estimated Odom made $110 million in on-court earnings over the course of his time in the NBA, so if he’s to be believed, virtually all of the money he made playing in the league was used to fuel his habit.

Odom credits his children for helping him to stay sober but acknowledges avoiding drugs is a constant fight (he does admit to smoking weed and launched his own line of marijuana products last year).

He might still have some work to do but props to him for turning things around.