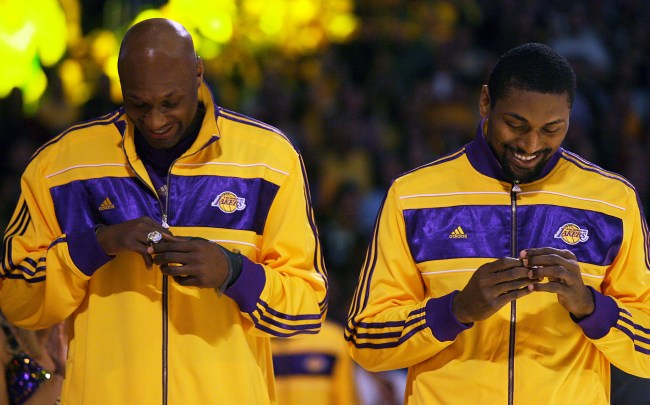 During the height of Odom’s struggles, the former Sixth Man of the Year sold the diamond-packed rings he won with the Lakers during the 2008-2009 and 2009-2010 seasons.

Lamar Odom's NBA championship rings, that were pawned off for a few hundred, are up for bid and estimated to sell for $50,000 each pic.twitter.com/kYceTBLbPW

‘Both [rings] were pawned and never retrieved by the six-foot ten-inch forward at the depths of his downward spiral,’ read the description from Heritage Auctions.

Bidding on the rings is scheduled to start in late January 2020 and they are expected to fetch at least $50,000 a piece, a sum that Odom will see none of after reportedly pawning off both rings five years ago for the equivalent of pack of marbles, a few baseball cards, and a dead bird.

Lamar has a history with giving away rings prematurely. While he seems to be doing well as of late, this past summer Lamar’s teenage son blasted him on social media after the former NBA star popped the question to girlfriend and personal trainer Sabrina Parr without ever informing his son.

“Not a [text] or phone call to see how people who’ve known this dude his whole life, to see how we would feel or react. knew shawty for 4 months and already got you twisted, fam n friends already don’t approve of homegirl but she already got your ass in a sunken place. Shame family gotta find out on social media but that’s been how life been all the time as a son of an odom.”