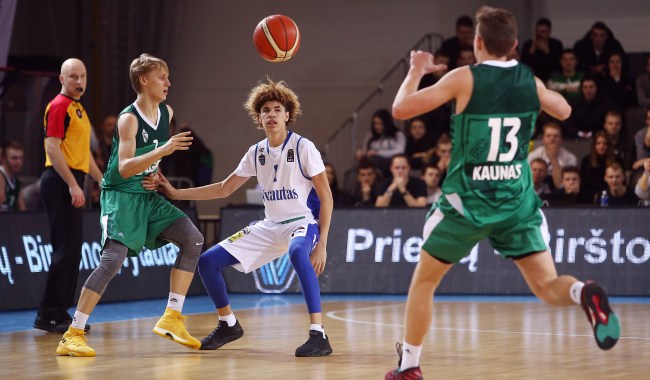 During LaMelo Ball’s freshman year, his basketball team at Chino Hills High School in California went 35–0 and won the state title. He was named Co-Freshman of the Year by MaxPreps.com after averaging a very impressive 16.4 points and 3.8 assists per game.

During LaMelo’s sophomore season, minus his brother Lonzo Ball, Chino Hills did not win the state title, but LaMelo did score 92 points in a February game versus Los Osos High School. However, after the game he was criticized by many, including Charles Barkley, for cherry picking his shots, often waiting near half-court rather than play defense.

Prior to his junior season, Chino Hills hired a new head coach, Dennis Latimore, and Ball’s father LaVar did not approve, so he pulled LaMelo and his brother LiAngelo out of school. They ended up signing with Prienai of the Lithuanian Basketball League, thus ending any real chance the brothers had of playing NCAA basketball with a major program.

Then, after playing professionally for the Los Angeles Ballers of the JBA, LaMelo returned to high school at SPIRE Institute, a prep school in Ohio. The team finished the season 16-2, (three games were cancelled by opposing schools due to LaMelo’s professional status) and are ranked 84th in the nation, according to MaxPreps.com.

In the meantime, LaMelo’s old high school in Chino Hills has been doing just fine without him. In fact, they’ve been doing so well that they’ve won the state title in both years since Ball left the team.

Chino Hills’ Will Pluma after winning back to back state titles. pic.twitter.com/oPd9jlsrrB

The team was led by Onyeka Okongwu, who will be playing for USC next season, and put up a championship game statline of 26 points, 14 rebounds, five assists and three blocks, despite controversially fouling out in the third quarter of the game. It was his third state championship in four years.

Chino Hills’ Onyeka Okongwu finishes with 26 points despite fouling out in the third quarter. Listen to what he had to say. pic.twitter.com/WYqvHv8a7I

Meanwhile, LaMelo Ball has not been recruited by any major college basketball programs, for obvious reasons, and wasn’t even invited to participate in any of the high school All-American games.

Had he stayed at Chino Hills the past two seasons, his basketball resume heading into college might have looked something like this…

Eh, I am sure LaVar knows exactly what he’s doing, right?