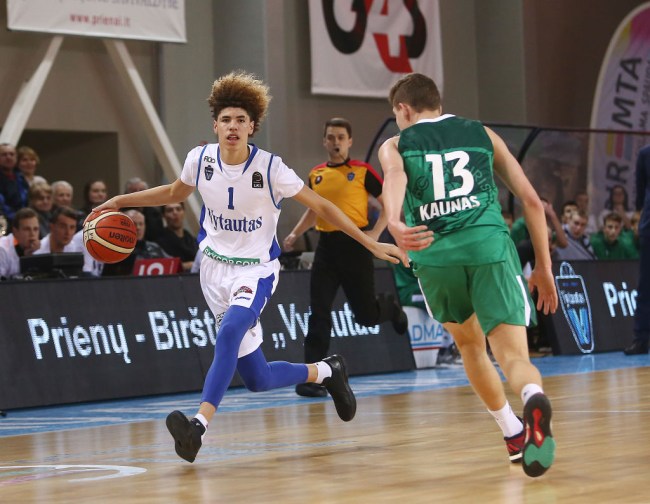 At just 17 years old, LaMelo Ball has lived a lot of life. The youngest Ball brother verbally committed to play college basketball for the UCLA Bruins at age 13, but later withdrew from Chino Hills High School after helping his team win a state championship to play professional ball in Lithuania. Ball then joined his father’s JBA League which offered top high school prospects a paid alternative to college ball.

Now, in another twist of events, LaMelo Ball has decided to return to high school in the United States to return to a more normal-ish life.

According to SLAM Magazine, LaMelo will enroll at Spire Institute in Geneva, Ohio as a senior. Spire is a prep school not a traditional high school so LaMelo will be eligible to play against other prep schools.

We’re going to see a lot of footage of LaMelo balling next season, which means we’re going to get a hefty dosage of his incredibly tall teammate–Robert Bobroczky, a 7’7” Romanian 18-year-old, who we reported on as a freshman two years ago.

Never forget that LaMelo Ball is now teammates with this huge and amazing man (Via @wflajosh) pic.twitter.com/pTKFTGlgVZ

“I’m excited to return to school and rejoin my class on the court for my senior year,” says LaMelo. “Playing in international competition was a great experience. I learned and matured so much. I appreciated the JBA experience my dad provided for me. I think it helped my development. I can’t wait to play with my peers.”

LaMelo Ball is going BACK TO HIGH SCHOOL to play at Spire Institute in Ohio 🚨 @MELOD1P @SPIRE_Institute pic.twitter.com/Msix0ZUQGk

LaMelo, who sprouted to 6’7”, averaged 40.0 points, 13.8 rebounds, 11.0 assists and 3.6 steals per game during his JBA season last summer. SLAM reports that the reasoning behind LaMelo returning to high school is to show scouts just how good LaMelo is when he’s playing against players his own age, as this will make him less of a mystery come the 2020 NBA Draft.

Ball will make his debut for the team on November 13, against national powerhouse La Lumiere of Indiana.