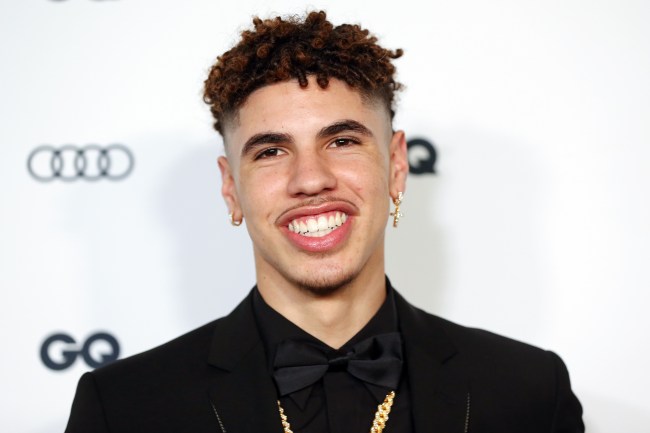 With LaMelo Ball projected to be a top-3 pick in the 2020 NBA Draft in a few months, there’s a lot of speculation about which team the 18-year-old might end up going to. One realistic possibility is for the talented point guard to end up on the Golden State Warriors, which, as of right now, own the best odds to finish with the No. 1 overall pick — which is wild to think about considering the team’s three titles over the past five seasons.

So would LaMelo Ball look good paired up with the likes of Steph Curry, Klay Thompson, Draymond Green and others? Probably, but his dad — outspoken maniac LaVar Ball — sure doesn’t seem to think so.

Previously saying that he doesn’t think Melo would fit well with the Warriors because of two future Hall of Famers, Curry and Thompson, LaVar recently went on another rant talking about how his son should start for Golden State should the draft him, even likening him to Michael Jordan. No, seriously, that happened.

Talking to Richard Jefferson, Channing Frye and Allie Clifton on the Road Trippin’ podcast, LaVar didn’t mince words when talking about his belief in his son’s ability, and trying to explain why LaMelo Ball should start no matter which NBA team he ends up with.

Just when you thought LaVar Ball couldn’t go any further off the deep end, he says something like this to totally prove that he’s got a tremendous amount of crazy in his mind. Under no circumstances should LaMelo be compared to the GOAT, and, despite the point guard being a potential top pick in the 2020 NBA Draft, his new team should absolutely sit his ass on the bench if he’s not ready to start right away. Long-term, it could help the kid’s development anyway.

Despite the insane expectation that LaVar voiced to the Road Trippin’ gang, he also added something that (hopefully) is more in line with how he really feels about the future team his son ends up with; stating that he just wants that team’s head coach to believe in Melo over anything else, regardless of what pick the point guard gets chosen.

“I’m not even worried about the No. 1, No. 3, none of that stuff matters. This is the one thing that I hope goes on is a coach believes in him and let him do what he does.”

Look, LaMelo Ball has proven to be a coveted prospect, but he’s nowhere near the talent level that Michael Jordan was after MJ played three seasons at North Carolina. So, while LaVar wants to think his son is the next coming of His Airness, he’s going to have to pump the brakes a little bit before proclaiming such a distinction.