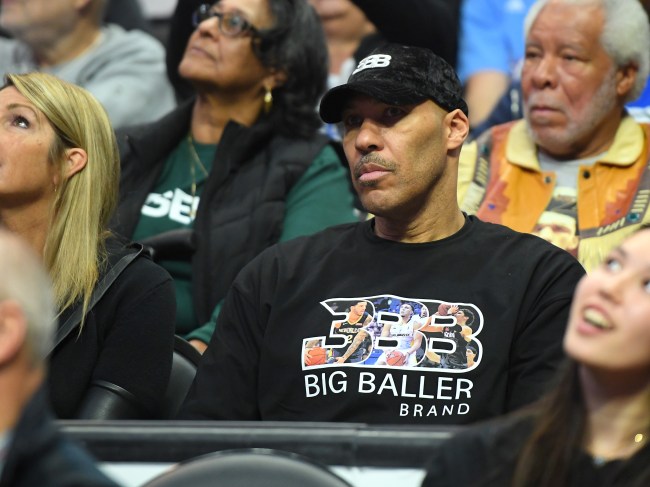 LaVar Ball has one of the biggest mouths this side of the Mason-Dixon Line. Actually, scratch that, the dude has one of the biggest mouths on the planet, with the overly confident former athlete and total has-been still talking that bullshit as if he were the GOAT in every sport that he ever played. We’ve seen LaVar do it before when talking about how much better he is than Michael Jordan — the actual GOAT — and now he’s doing it again; this time talking crap about rookie sensation Zion Williamson.

As a quick reminder, Zion’s the bullish teammate that LaVar’s eldest son, Lonzo Ball, often lobs passes to into the post or on a fastbreak. Zion’s the guy averaging 23.6 points and 6.8 rebounds in his first season in the league. Zion’s the guy who was taken No. 1 overall with the presumption and hype of becoming the next LeBron James. Zion’s the guy who the Pelicans hope to plan on building around for the next decade-plus. Yet, here’s one of Zion’s teammates’ dads, LaVar Ball, running his mouth and questioning him. What the fuck is this, pee-wee football?

LaVar’s bold (and embarrassing) proclamation came as a guest on a recent Pardon My Take podcast, when the walking soundbite of a dad said Zion would stand zero chance against him in a game of one-on-one back in his prime. Here’s what LaVar had to say.

“I’ll murder that boy, he too small..”💀 pic.twitter.com/T8Cd7ytKSe

“Stop it! I’d murder that boy. He too small, he too slow. I’m way too fast for that boy, he a youngster, man. My prime time, I would kill him. I was just too strong and too fast.”

Uh, what?!? As a reminder, LaVar Ball averaged a “dominating” 2.2 points and 2.3 rebounds per game during his lone season at Washington State — which was the highest level of competition he faced during his hoops career. He played so sparingly that the ballboy probably had more court time than he did.

I’m all for a little bit of LaVar, but, damn, when he’s just running his mouth like this and speaking absolute nonsense, it’s impossible to take anything he does seriously. How can anyone take him seriously when he honestly believes that he’d stand a chance against Zion Williamson one-on-one? Prime or not, Zion’s a load at 6’6″ and about 285 pounds, so it’s safe to say Ball wouldn’t have stood a chance in the post against him.