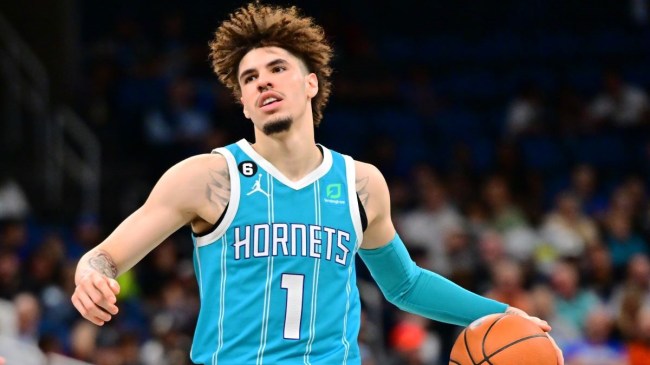 LaMelo Ball is one of the brightest young stars in the NBA. After growing up in the shadow of his brother Lonzo and father LaVar, LaMelo has blossomed into a dynamic combo guard who is now the face of the Charlotte Hornets’ franchise.

The Hornets selected Ball with the third overall pick in the 2020 NBA Draft and immediately looked like geniuses for doing so when he won the NBA Rookie of the Year Award the following season. Ball took his game to an even higher level in 2021-22, averaging 20.1 points, 7.6 assists, 6.7 rebounds and being named an NBA All-Star for the first time.

But things have been tough thus far in 2022.

Ball injured his left ankle in the preseason. The injury cost Ball the first 13 games of the regular season and the Hornets limped to a 3-10 start to the season. Things haven’t been much better since his return, as Charlotte is just 1-2 in the three games Ball has played. But things could be about to get much, much worse.

The Hornets dropped to 4-12 with a brutal home loss to the Indiana Pacers on Wednesday night. Ball was the center of attention. The young star put up 26 points and six assists in his first home game of the year. But with 1 minute and 34 seconds left in the contest, he reinjured his ankle when he stepped on a fan’s foot trying to save a loose ball.

Ball did not speak to reporters after the game and Hornets coach Steve Clifford didn’t offer an update. But Charlotte has been plagued with injuries throughout the season. Starters Cody Martin and Gordon Heyward have each missed at least eight games and first-round pick Mark Williams recently suffered an ankle injury in the G League.

“It’s very tough but we have to be professionals about it,” said Hornets guard Kelly Oubre Jr. “It’s the game of basketball and those things happen.”