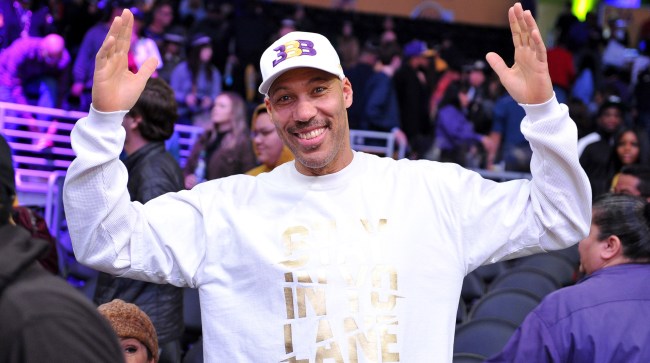 Here’s a new one from LaVar Ball. Now he guarantees all three of his sons will end up playing for Michael Jordan on the Charlotte Hornets at some point in their NBA careers.

During his appearance this week on The Truth Podcast, LaVar stated, “All three are set to go to Charlotte, I can guarantee it. Michael will be the first black owner to be a champion. Guaranteed … They have talent, them dudes can switch at the 1-2-3 … Three strong mindsets … Chemistry is just too good together.”

That’s quite a departure from his previous claim that Lonzo, LiAngelo (who just got cut by the Pistons), and LaMelo would all be playing together in Los Angeles for the Lakers.

LaVar also made another daring statement regarding his sons when he compared LaMelo, the only family member that is currently on the Hornets, to a player many believe should be in the Basketball Hall of Fame.

“If I’m comparing Melo to anybody It’s gonna be Penny Hardaway,” said LaVar. “Long lanky frame, athletic, can pass that ball, and do what he want. Penny’s the only one.”

Hopefully, LaMelo can stay healthier than Penny was able to during his career.

Of course, no interview with LaVar Ball would be complete without him rehashing his absurd notion that he can beat Michael Jordan in a game of one-on-one – if someone is willing to put up $200 million, that is.

At another point in the conversation, the discussion turned to one of LaVar’s favorite punching bags, his son Lonzo’s teammate in New Orleans, Zion Williamson.

“That Zion has always been a good eater and a hefty dude, and plays how he plays,” said LaVar. “He a big country boy, leave him alone. He loves basketball and has a big body. He can’t help it that he’s that big and can move like that. People like to create the ‘he’s too big narrative,’ but he’s jumping out of the gym at 220. Who cares! He runs 100 miles an hour!”

As you may or may not recall, at one point LaVar also claimed that he could beat Williamson in a game of one-on-one and ridiculously stated that Zion “can’t hold a candle” to his son LiAngelo (the one son not currently in the NBA).

Of course, he also compared LaMelo to Michael Jordan, so, as we always must do with LaVar, take everything he says with a cargo ship full of salt.