LaVar Ball Continues To Talk That B.S. By Hinting At A Scheme That Would Bring His Three Sons To The Lakers Together 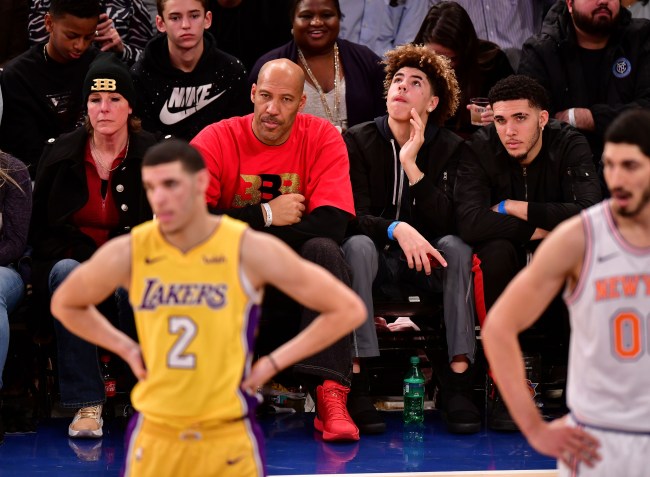 LaVar Ball continues to try and stay relevant, running his mouth as much as possible to try and draw attention to himself. Given the times, and how there aren’t any live sports happening, I’m all for it. But, sheesh, the dude sure does just say whatever comes to his mind, doesn’t he?

While LaVar’s popularity has (seemingly) taken a tumble over the past year or so, the dad of three talented, hoops-playing sons — Lonzo, LiAngelo and LaMelo — still finds unique ways to draw a crowd. Whether it’s talking about how he’d dominate this year’s No. 1 overall pick Zion Williamson in one-on-one, disrespecting his own wife in a weird way, or the expectations he has for his youngest son as he enters the NBA, the eldest Ball will basically open his mouth and garner attention.

Well, that’s what happened again Tuesday, as LaVar Ball seemingly dropped an inside scoop that claims Lonzo, LiAngelo and LaMelo will all suit up for the Los Angeles Lakers together at some point down the road. Take a look below at LaVar’s outrageous suggestion.

“They coming back to the Lakers later. That’s the inside scoop, don’t let them know that yet. We pop up all three of them over there.”
– LaVar Ball on Lonzo/Gelo/LaMelo teaming up at Staples Center for the #LakeShow pic.twitter.com/k1VQ5lgXsw

“They coming back to the Lakers later. That’s the inside scoop, don’t let them know that yet. We pop up all three of them over there,” he said.

Just when you thought LaVar Ball couldn’t get any more irrational, he comes out and says something like this to prove you wrong. Seriously, does this man just wake up and drink his own bullshit for breakfast before spewing it out in front of a camera?

Remember, this is the same LaVar who said he didn’t care at all about what the Lakers are doing this season, so it’s a strange sentiment that he’d reference the organization as a future landing spot for all three of his sons. Plus, Lonzo tried his hand with the Lakers after the team took him No. 2 overall in the 2017 NBA Draft, it didn’t seem to be a good fit, and now he’s on the New Orleans Pelicans playing with Zion — so it’s kind of doubtful Lonzo and the Lakers would explore reuniting.

That said, if there’s one thing we know about LaVar Ball, it’s that he plays by his own rules, and, who the hell knows, maybe he’s scheming something that would actually lead the Lakers to put together a pact of Lonzo, LiAngelo and LaMelo at some point down the road? It’s doubtful… and crazy… and insane to even suggest, but that’s just how LaVar likes it.