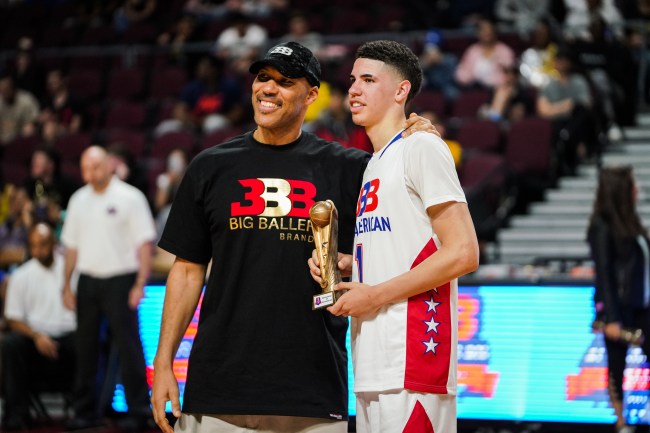 LaVar Ball makes soccer moms look like nuns, because the loud-mouthed, outspoken, intimidating figure will fire off any and everything that pops into his mind without concern for consequence whatsoever. Whether that was about his oldest son, Lonzo Ball, a couple of years ago leading up to the NBA Draft, or, more recently, about his youngest son, LaMelo Ball, leading up to the 2020 NBA Draft, LaVar doesn’t filter himself for anyone.

While it was entertaining at first, LaVar Ball’s blunt ways has become old hat these days, which is why he’s not quite the figure he first was when Lonzo was going through the pre-draft process. Remember, that was when LaVar was creating Big Baller Brand, talking crap to both Michael Jordan and LeBron James, and, generally speaking, being a pest in the sports landscape for all to be entertained by.

These days, while LaVar’s avoided the headline-grabbing stories of the past, he’s still as disruptive as ever — well, when he wants to be. For instance, take his recent comments on the family’s TV show, Ball in the Family, which shows Daddy Ball back to his demanding, irritable and aggressive ways.

With LaMelo Ball set to (potentially) be a top-3 pick in this year’s NBA Draft, LaVar made sure he let any team thinking about selecting the teenager know his expectations for his son. In an interaction between LaVar and LaMelo’s manager, Jermaine Jackson, Ball was told that an NBA scout wanted to know how he might react if LaMelo was taken No. 1 pick overall and still only played a mere 12 minutes a game. Oh, that just wouldn’t fly.

“Here’s the thing — as long as they do the right thing. Don’t draft my son and play him no 12 minutes and think I ain’t gonna say (expletive). Who’s ever been drafted No. 1 and plays 12 minutes? So don’t act like I ain’t gonna say nothing. I’m gonna go crazy as (LaMelo). So, if that’s what they wanna say, hey, do the right thing. My son gonna be at the team where he’s supposed to be at. But if you don’t have no confidence in him, don’t be drafting him no No. 1, and don’t be doing (expletive) with him. That’s a waste!”

He continued: “And if somebody ask me something, I’m gonna do the exact same (expletive) I did last year. So, hey, whether you take him one or two, it’s on you. He’s gonna be that No. 1 pick, and like I said, all these other folks wanna be acting like till you get up there, and it’s they turn to pick, I guarantee you they ain’t passing up on your boy.”

A producer later asked LaVar if he thought those concerns from NBA officials were valid, and LaVar, again, didn’t agree.

Welp, just like that, LaVar Ball may have just scared off a handful of NBA teams who just don’t want to deal with an aggressive dad who thinks the Association is his personal rec league. While LaVar could complain all he wanted to while his sons were growing up, the fact that he’s still doing this as they prep for a pro career is sad — and it’s not doing his kids any favors.

We’ll have to wait and see if any of this impacts LaMelo on draft day, but, damn, you’d think LaVar would learn from what’s happened early on in Lonzo Ball’s career and just stay quiet. Unfortunately, that’s just not his style.