The Parents Of Jrue, Justin And Aaron Holiday Have Some Advice For LaVar Ball On How To Get 3 Sons To The NBA 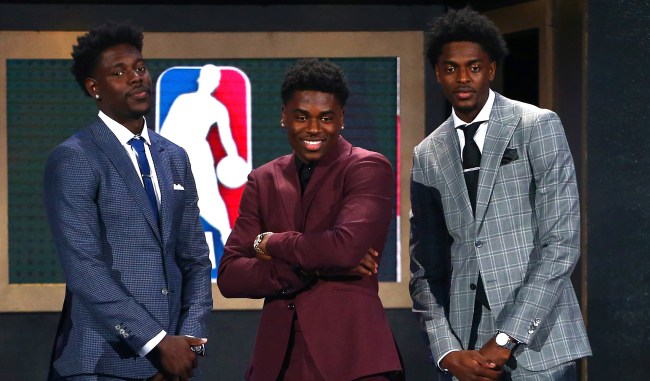 With the 23rd pick of the 2018 NBA Draft, the Indiana Pacers selected point guard from UCLA, Aaron Holiday. With that selection, the Holiday family achieved LaVar Ball’s oft-talked about dream of having three sons playing in the National Basketball Association.

You may recall that early in the NBA season, Ball was asked if he could see the day where LeBron, LeBron’s son Bronny, Lonzo, LiAngelo and LaMelo are all on the same team and LaVar responded, “Hey, they could. They could. LeBron’s son gotta bring his game though. Can’t just go on the name, gotta have some game.”

Funny that he, of all people, would try to discredit someone for trading off their name when everything related to his sons, other than Lonzo, has been a product of almost nothing but his own hype.

Perhaps he could learn a thing or two from Shawn And Toya Holiday, whose sons Aaron, Jrue and Justin are all currently on NBA rosters – two of them after playing basketball for LaVar’s favorite college, UCLA.

Luckily for him, Mr. and Mrs. Holiday, who actually know LaVar and his sons, were recently asked about this very topic.

“We didn’t get the three in there, they got themselves in there from their talent and their hard work,” said father Shawn. “We just kind of, just kind of coached them. Just helped them to [inaudible] their skills to where they would be able to play at that level.”

When asked what advice they’d give LaVar in his quest to duplicate the basketball success of their family, mom Toya said, “God’s grace, I tell you. It’s not by our kids’ strengths, it’s God’s grace.”

“But I think it’s awesome that LaVar wants his children there,” she continued. “That’s what we want as parents. You want them to have their dream, so keep pushing. I think that’s great.”