Lavar Ball Rips UCLA, Says There’s No Way LaMelo Goes There After ‘What They Did’ To LiAngelo 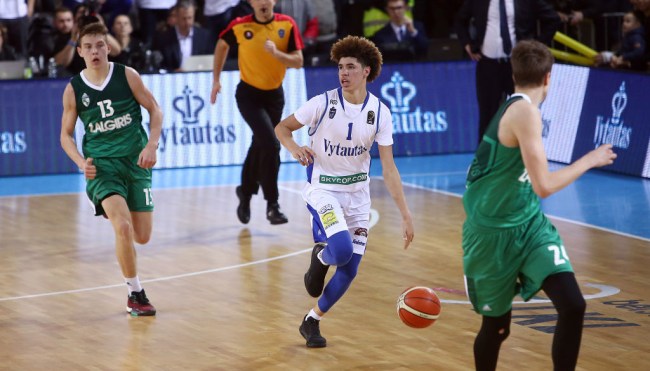 With LeBron James having firmly established himself as the alpha male on his son Lonzo’s professional basketball team, LaVar Ball is now turning his attention, and his mouth, to his son LaMelo and his “amateur” basketball prospects.

As you may recall, LaMelo is back in the United States and back in high school, playing basketball for Spire Institute in Ohio.

LaMelo, who has been playing pretty well for Spire, has LaVar now thinking about colleges.

That college, however, will not be UCLA, where his brothers Lonzo and LiAngelo attended, until LiAngelo left college to play in Lithuania after a shoplifting incident, and then going undrafted by all of the teams in the NBA.

The fact that LaMelo was already a professional basketball player is, of course, no obstacle, according to LaVar, who told TMZ Sports his son LaMelo is “unbeatable” and “better than LeBron” was as a teenager.

“Heck no, he won’t be at UCLA,” LaVar replied when asked if LaMelo would also become a Bruin. “UCLA? Why? After what they did to my other son? Are you crazy?”

What THEY did. Wow.

“Suspend him and don’t tell him when he supposed to be able to play and all that? No, they ain’t behind him like that,” LaVar continued.” One mistake and now you put him to the side and act like he’s supposed to come the next year?”

One mistake. The team went to China and he got arrested for shoplifting then reportedly lied about it.

Not that any of that mattered. UCLA was already on LaVar’s sh*t list because they made LiAngelo wear number 15 when he had been wearing number 3 all his life.