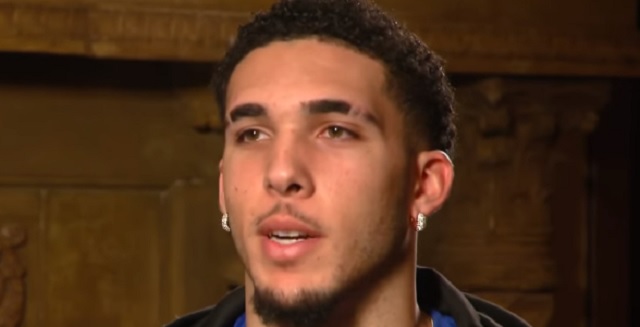 Yesterday morning, LiAngelo Ball went on the Today show with his father LaVar to claim that he was just “following his teammates” during the whole shoplifting incident in China.

“We all went out one night, went through the malls, went to the Louis Vuitton store, and people started taking stuff and me just not thinking and being with them, I took something, too,” LiAngelo said. “We left thinking we’d just get away. You know how kids think. I didn’t realize until I got back to my hotel, I’m like ‘That was stupid.’ But by then it was too late and then sure enough, the next morning, the police came and got us.”

FS1 host Jason Whitlock is calling BS on LiAngelo’s story and claims to have a “highly reliable source” who is telling him that LiAngelo lied during the interview to make himself look better.

“And of the three kids — only one of them shoplifted from all three stores — LiAngelo Ball,” Whitlock continued. “And so, this insinuation that these other two kids — Cody Riley, Jalen Hill — that they were the ringleaders. No, LiAngelo Ball, on the Today show, with his dad sitting right there, just backed the bus over two black kids and basically blamed them and said he was just following behind them. That is not remotely accurate. His credit card declined, and he was the only of the three to shoplift from all three stores.”

According to @WhitlockJason, LiAngelo Ball had his credit card declined which triggered the shoplifting incident in China. Of the three kids, only one of them shoplifted from all three stores: LiAngelo Ball. pic.twitter.com/x7oDCa98xx

During the interview, LiAngelo does curiously only talk about stealing from the Louis Vutton store despite it being common knowledge that he and his teammates shoplifted from three different stores. We’ll see what LaVar, LiAngelo and the Big Baller Brand team have to say about Whitlock’s report.

Update: Whitlock is going off on LiAngelo on Twitter.

Liangelo Ball's credit card getting declined sparked China shoplifting spree. Linagelo is the only one of 3 players to steal from all 3 stores. President Trump's role was getting them home in 8 days rather than 20, which saved them academically at UCLA.

Outrageous for Liangelo Ball to go on Today Show and back a bus over 2 black former teammates, Jalen Hill and Cody Riley.