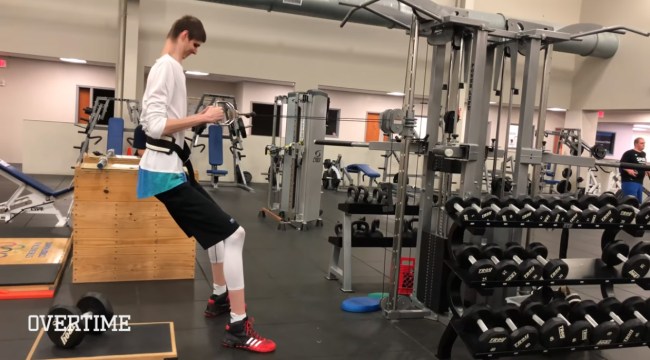 LaMelo Ball’s return to playing high school basketball at Spire Institute in Ohio after playing PROFESSIONALLY in Lithuania earlier this year has not been received very well, especially by teams on Spire’s 2018 schedule.

However, there has been one positive to come out of the Ball family invading Geneva, Ohio and that is our now being aware of one of LaMelo’s teammates Robert Bobroczky – all 7-feet, 7-inches of him.

Bobroczky, from Romania, was already relatively famous in basketball circles, for obvious reasons, before LaMelo joined his high school basketball team. Heck, he met Knicks star Kristaps Porzingis six years ago when he was only 12-years-old (and stood nose-to-nose with him at 7’1″ – he now calls Porzingis “short”).

Now, with LaMelo Ball bringing the the circus to town, Bobroczky is getting even more attention.

After that interview with Bobroczky in the weight room, the folks at Overtime asked him to take them through one of his full workouts, and bro is putting in some serious work with the goal of adding some weight to his slight frame.

Bobroczky also discussed what kind of food fuels his diet, and about his meeting with Kristaps Porzingis.

Check it all out below…