Lavar Ball Says It Would Take $200 Million For Him To Play Michael Jordan: ‘We Over 50!’ 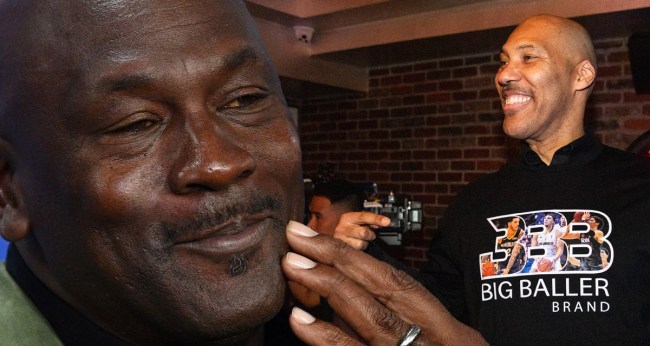 After talking all sorts of trash about how he could beat the GOAT Michael Jordan in a game of one-on-one, even doubling down on his claim after his son LaMelo Ball was drafted by and became a member of MJ’s Charlotte Hornets, he is now finally starting to walk things back a little bit, telling TMZ Sports, “Realistically, neither one of us is gonna do this. We over 50!”

LaVar, who once said he would make Michael Jordan cry if he played him one-one-one, reiterated that it would take some serious cash to make it happen. As in, $200 million in cash.

“If it’s a dollar short, we’re not playing,” said Ball. “Who comes up with that money? The people who want to see!”

Don’t poo-poo the idea just yet. Remember, Mike Tyson is fighting Roy Jones, Jr. for a maximum of 16 minutes in which no winner will officially be crowned this weekend and they’re charging $49.99 to watch it.

“Whenever they come with $200 million I’ll be ready to put my shoes back on and give you one more game for the big baller,” LaVar continued.

Ball also says he hasn’t spoken to Jordan about playing, saying, I’m the baddest. He got to come see me!”

For his part, three years ago (yes, this imaginary feud has been going on that long) Jordan said about LaVar and his wild boasting, “You got to understand the source. I think he played college, maybe? He averaged 2.2 points a game. Really? It doesn’t deserve a response, but I’ma give it to you because you asked the question. I don’t think he could beat me if I was one-legged.”

Ball wasn’t just out talking trash about MJ though. He was actually with his family unloading a semi-truck’s worth of supplies for the Thanksgiving holiday to those in need. Very cool.