The Mike Tyson-Roy Jones Jr. Fight Won’t Be Officially Scored, Will Not Have A Winner Announced 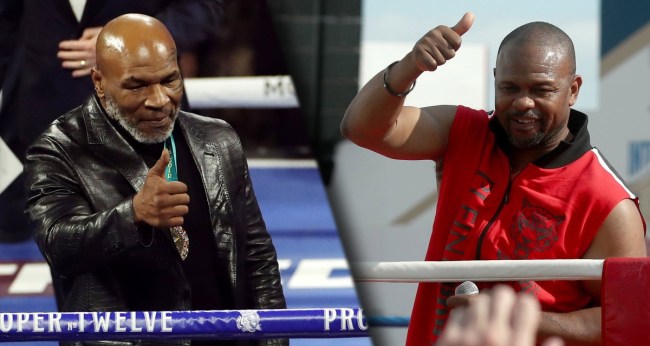 The eagerly anticipated (I guess) Mike Tyson comeback fight against Roy Jones Jr. taking place over Thanksgiving weekend will reportedly not be scored and a winner will not be announced. So that sucks.

That’s right. The first fight for Mike Tyson since he quit on his stool after the sixth round against Kevin McBride on June 11, 2005 will have no official judges.

This is important to know before you plunk down $49.99 for the pay-per-view broadcast on Triller on Nov. 28.

According to MMA Fighting, who spoke to California State Athletic Commission executive director Andy Foster, because the Tyson-Jones fight is technically an exhibition (even if both fighters say ther are willing to die in the ring on Saturday) the rules aren’t going to be what boxing fans are used to seeing.

“Let’s call it an exhibition. That’s what it is,” said Foster. “I want the public to know what this is because I don’t want people to be disappointed. As long as they know this is an exhibition, I’m fine for everybody to earn.”

Foster continued, “There’s no official judges. The WBC is going to have some guest celebrity judges remotely, not official, not 10-9 [scores], nothing like that. No cumulative score. No winner announced.

Someone might want to let Mike Tyson know that.

“There’s no winner going to be announced,” Foster added. “I do think that’s very important to get out there. The unofficial scores are for entertainment only and that’s done by the WBC remotely. Not by the commission cause the commission didn’t credential those judges because of COVID. It’s for entertainment purposes only. There’s no official winner at the end of this.”

This despite the fact that the WBC-named Frontline Heavyweight Title will be awarded at the end of the fight … to both boxers.

Other unique rules of note.

• The fight will be 8 two-minute rounds so the total maximum time they will spend fighting is 16 minutes.

• If either boxer suffers a cut the fight is over.

• No knockouts are allowed. (Again, someone might want to tell Tyson.)

Related: Evander Holyfield, 58, Says He Wants Next, Claims Mike Tyson Is Ducking Him

In addition to the Tyson-Jones fight at the Staples Center in Los Angeles, six other bouts will be contested on the undercard (which begins at 9 p.m. ET) and the prelims.